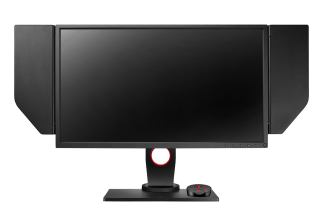 If you're a competitive gamer, chances are that you've already heard of BenQ's Zowie XL2546 with its ultra-fast refresh rate of 240 Hz. But the BenQ Zowie XL2546S is a new name to you. That's because it's an updated version of the old display announced today that adds support for Adaptive-Sync, BenQ's new DyAc+ technology -- and that's it. As a successful monitor to begin with, BenQ opted to change nothing that didn't need to be because why mess with a successful recipe?

Consequently, underneath it all the XL2546S is still largely the same monitor as the XL2546S, with a 24.5-inch TN panel with 1080p resolution and that high refresh rate. The contrast ratio is still the bog-standard 1,000:1, and brightness is still a maximum of 320 nits.

The XL2546S also features AMD FreeSync, while its predecessor had no form of Adaptive-Sync. But hte new display also comes with an update we're less clear about.

The previous XL2546 already came with DyAc, and the new one comes with DyAc+. The essence of the DyAc technology is that the panel's backlight is only on when the image is stable. Between frames, there is some ghosting that may occur during fast movements, so BenQ's trick to ensure this isn't visible is simply to turn off the backlight when it's happening. It's a smart trick but only works at really high frame rates because at 60 Hz it would create too much visible flickering . Of course, that's not an issue for this 240 Hz monitor.

Sadly, BenQ isn't very open about what the difference is between DyAc and DyAc+, stating that "DyAc and DyAc+ provide spray control with only differences on the panel specifications." Indeed, in the panel specifications we can see that the new XL2546S comes with "Fast Liquid Crystal," whereas the old one does not. We reckon this might represent a response time jump from 1ms to 0.5 ms, (like the bigger XL2746S, but the spec sheet makes no mention of response time. Additionally, BenQ's announcement said DyAc+ "is based on this same technology and through panel optimization, provides gamers with a different option for actions such as spray control," but that doesn't tell us much either.

It doesn't appear that BenQ has given owners of the XL2546 much reason to upgrade to the XL2546S. But for those shopping for a new monitor, the XL2546S looks like it brings a lot to the table for gamers.

The original XL2546 typically sells for around $500, so we reckon the new version will cost around same price, slowly replacing it's predecessor as supplies for the old model run out.