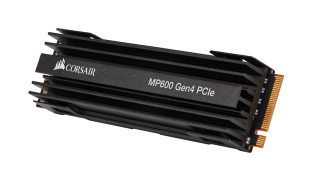 Corsair's MP600 Force Series PCI-Express 4.0 SSDs have been around since August, but their prices were quite prohibitive, and you were only able to use them in AMD Ryzen 3000 series systems. Now, Amazon's having a prime deal on these SSDs, bringing their price down to $359.99, down from the MSRP of $449.99.

That you could only use the units in Ryzen 3000 systems is sadly still the case, but those platforms have become much more accessible in prices lately, and at this new price one can more easily justify dishing out for this SSD. Per gigabyte, it might cost twice as much as a SATA SSD (about $0.18/GB vs. about $0.10/GB), but with access to four PCI-Express 4.0 lanes its performance is roughly a tenfold faster.

The MP600 can sustain read speeds of up to 4950 MB/s for sequential workloads, and write speeds of up to 4250 MB/s. It's built on an M.2 form factor in the 80mm length, so it can fit on most motherboards. Just make sure you've got space for the upwards protruding heatsink needed to cool the unit.

There is no expiry on this deal, which means we don't know when it will end. For more SSD's check out our Best Black Friday SSD Deals.