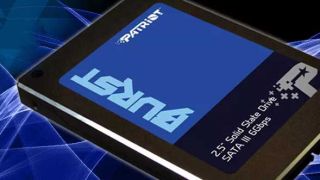 We've seen some impressive Cyber Monday SSD deals, but Newegg's sale on the 960GB Patriot Burst offers the lowest cost per GB we've seen this year.  The 2.5-inch SATA drive is just $69.99 after mail-in rebate, which adds up to just 7 cents per GB. That's the lowest price we've seen on the Burst, which normally goes for around $85 to $87.

The Burst would make a great secondary drive to house the games you're currently playing. And it should be decent as a boot drive as well, as it has a 32MB DRAM cache, unlike many low-priced solid-state drives.

The 2.5-inch Burst uses a Phison 11 controller. It ships with a 3-year warranty, standard for a budget-priced drive, and is rated for sequential reads of up to 560MBps and sequential writes of up to 540MBps, which is about as fast as you're going to get on the SATA III interface.