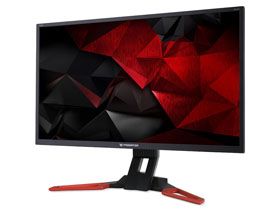 To read about our monitor tests in depth, please check out Display Testing Explained: How We Test Monitors and TVs.Brightness and Contrast testing is covered on page two.

High brightness is not a trait of many Ultra HD screens but the XB321HK has more output than most. Here it’s only exceeded by the Asus QHD panel. Acer claims 350cd/m2 but we couldn’t quite get there with our sample.

Black levels are also not a strong suit of high-res monitors. Acer’s smaller Predator, the XB271HK takes the win here, but the others aren’t too far behind. We anxiously await the day AMVA panels acquire Ultra HD resolution in the gaming category.

Overall contrast is decent at 1049.1:1. But this comes at the expense of some color inaccuracy at lower saturation levels; and there’s a gamma issue that requires lowering the contrast control to fix. Will this be a problem? Read on to find out.

The backlight’s minimum output is an ideal 55.0293cd/m2. If you like to game in the dark, just drop the slider to zero and enjoy. The XB321HD and PG279Q are ideally configured for this. The other screens get just a little too dark. OK, the ViewSonic is a lot too dark.

The ViewSonic posts a very low black level number, but that isn’t indicative of superior contrast. The XB321HK remains solidly in the hunt.

Contrast remains consistent throughout the jumbo-Predator’s backlight range. It also seems the IPS screens outclass the TN samples in both tests. There’s a reason gamers prefer the tech; and we do too.

It seems that calibration hasn’t affected the XB321HK’s black level performance. All we did was lower the contrast slider, change the gamma preset from 2.2 to 1.8, and drop the blue slider one click.

The final contrast value is only 6% down from the max result. Obviously the contrast slider adjustment exacts no penalty, and that’s a relief. Most monitors would not tolerate such a significant adjustment. 40 is probably where the control should be set from the factory.

ANSI contrast drops a little more but not too much. Our XB321HK sample doesn’t have the very best uniformity but intra-image contrast still looks good both to our instruments and to our eyes. The panel part appears to be of high quality.