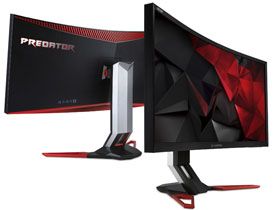 The Z35 is a huge monitor and it comes in an appropriately large carton that has a convenient carry handle at the top. You won't be toting it to too many LAN parties though thanks to its hefty weight. The box does protect the contents well and the curved panel is completely supported by rigid foam during shipping. Assembly consists of sliding the metal/plastic base onto the upright and tightening down the captive bolt.

A large external power supply provides current. Given the sheer bulk of the chassis we thought there might be room for an internal unit but it seems that nearly every curved screen we've tested uses a brick. This particular example also employs a right-angle connector, which is quite difficult to marry up with the panel's recessed inputs. A straight plug would make far more sense.

Bundled accessories include USB 3.0, DisplayPort and HDMI cables along with a quick start guide. The user manual can be downloaded from Acer's website.

When we first unpacked the base it reminded us of a boomerang one might see in a sci-fi film. The red parts are anodized aluminum and the black areas are hard plastic over a metal core. Once attached to the upright the package becomes a solid monolith with no hint of cheapness in sight. Build quality is premium for sure.

You will need a substantial amount of desktop space to accommodate the Z35. At nearly a foot deep and almost three feet wide, it dwarfs even the 32-inch 16:9 screens we've tested. The anti-glare layer has a little shine to it and will pick some reflections though the tight curve mitigates the effect. We had no trouble seeing a saturated image in our sun-lit office.

Controls consist of six down-facing buttons that are easy to operate without looking. They click with a satisfying feel, though a joystick would be a welcome addition. A soft glow comes from a light at the bottom of the panel that can be adjusted for color, brightness and pulse effects.

The Z35 is one of the few curved monitors to offer a height adjustment. Despite its weight, the panel moves easily and stays where set in its five-inch range. You also get 25 degrees of back-tilt and 5 degrees forward. It's easily one of the nicest stands we've encountered on any display.

The space-fighter styling extends around back where you'll find large areas of red plastic acting as ventilation grills. The openings are generous mainly to accommodate the nine-watt DTS-tuned speakers. They offer a lot more volume and presence than typical monitors but the fact that they don't face forward hampers their quality. Sound is muffled though it's better than the norm.

The down-facing input panel is recessed making it tricky to access, especially considering the right-angle power connector, which makes no sense. Video inputs include one each of DisplayPort 1.2a and HDMI 1.4. You'll need to use the former for G-Sync and for 200Hz operation, which also requires a GeForce GTX960 BOOST or better. You can use G-Sync up to 144Hz if you have a GTX650Ti at minimum. HDMI will support the Z35's native resolution up to 60Hz. To the right of the video inputs is a headphone jack.