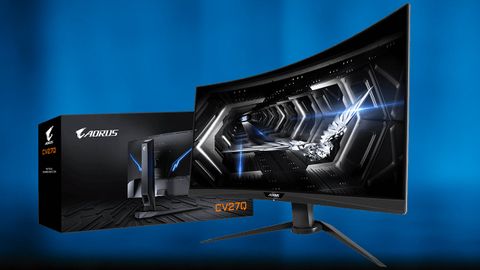 The Aorus CV27Q ticks all the boxes for performance gaming. It delivers excellent color and high contrast coupled with a reliable 165 Hz refresh rate and adaptive sync. Add HDR and extended color, and you have a winner for less than $450.

We’ve seen a number of 27-inch curved gaming displays hit the streets of late. To keep speeds at their highest, they mostly come in FHD resolution (1920 x 1080). But for the many seeking high pixel density, we consider QHD resolution (2560 x 1440) to be the sweet spot of performance and image quality. Gigabyte answers that need with the Aorus CV27Q, one of our Best Gaming Monitors and the higher-resolution brother to the FHD Aorus CV27F.

In addition to a QHD VA panel, it offers DCI-P3 color and FreeSync 2 HDR and can also run G-Sync, although it’s not certified to do so. Add a 165 Hz refresh rate and super-fast panel response time, and you have a potential winner selling for an attractive price ($430 at the time of writing or $400 at Newegg after rebate).

VA is our favorite panel technology because of its high native contrast. While viewing angles aren’t quite on par with IPS displays, VA monitors still look better when seen off-axis than TN screens. Plus, many VA displays offer high color quality and accuracy. For example, the CV27Q covers 86% of the DCI-P3 gamut and renders a 6500K white point without the need for calibration.

Gamers looking for bleeding-edge tech will also want HDR capability. The CV27Q promises 400 nits brightness with HDR content with its VESA DisplayHDR 400 certification. The CV27Q’s HDR10 mode kicks in automatically when the proper signal is detected. It brings extra pop to both games and video, and along with the larger color gamut, really enhances the user experience. You also use still use FreeSync and even G-Sync (even though it’s not officially certified), while in HDR if you use the DisplayPort 1.4 port.

Note that to use G-Sync with HDR or otherwise, you'll need an Nvidia graphics card and the latest drivers. Here’s how to run G-Sync on a FreeSync monitor.

Unboxing the CV27Q reveals the same solid-metal base, stout upright and panel found in the lower-resolution CV27F. The parts assemble without tools. If you want to use your own bracket or monitor arm, the monitor comes with a 100mm VESA mount, but you’ll have to source your own bolts. Cables include an IEC cord for the internal power supply, plus USB 3.0, HDMI and DisplayPort (necessary for HDR with FreeSync or G-Sync). All are quality high-bandwidth wires capable of carrying QHD resolution signals.

There are no built-in speakers, but you do get 3.5mm in and out jacks. That way, you can use headphones or run the sound out to external speakers connected to the monitor. The headphone interface features active noise cancellation using mics built into the front bezel.

Physically, there is no difference between the CV27F and the CV27Q. The panels differ only in their resolution. With a higher resolution in the same size, the CV27Q has a pixel density of 109 pixels per inch (ppi), while the FHD counterpart has 81.59ppi. Both have a curve radius of 1500mm, which provides a subtle wraparound effect. With a 16:9 aspect ratio, we saw no image distortion from the slight curve. The bezel is flush with the anti-glare layer and measures a scant 9mm around the top and sides with a wider 23mm strip at the bottom.

A single joystick under the panel’s center-point offers control over all functions, including the power toggle. There’s also a white LED status indicator under the Aorus logo on the bottom bezel.

Around back is an LED lighting effect that’s controllable via the on-screen display (OSD). You can also coordinate it with other RGB Aorus components, such as its LED fans and CPU coolers, using Gigabyte’s RGB Fusion app.

The stand provides a 5.3-inch height adjustment, plus 20-degree swivel in each direction, 21-degree forward tilt and 5-degree backward tilt. Build quality is excellent with smooth, firm movements. During my usage, the panel stayed in place without wobbling. The base has over 10 inches of depth to ensure it won’t fall over.

Around back, you’ll find an array of connections with two HDMI 2.0 inputs and a single DisplayPort 1.4. To couple HDR with FreeSync or use G-Sync in any form, you must use DisplayPort.  But for SDR content, you can use FreeSync over HDMI.

Pressing the joystick opens a quick menu with Aorus Game Assist and Dashboard. The latter works via USB and displays an info panel that monitors things like your PC’s CPU temperature and fan speeds. Clicking the joystick to the rear opens the full OSD.

The Gaming sub-menu includes several game-enhancing features. The Aim Stabilizer is a backlight strobe that eliminates motion blur. To engage it, you must be running at 120 Hz refresh rate or below and disable adaptive refresh (FreeSync or G-Sync). It also reduces light output by around 60%.

The overdrive feature works extremely well; even its fastest setting didn’t create ghosting. At the top of this and all menu screens is a status bar that reports input resolution and status of the settings in each sub-menu.

Tweakers will enjoy the CV27Q’s comprehensive set of calibration options. While it delivers excellent accuracy out of the box, there is a little room for improvement. You can accomplish this with five gamma presets and the Color Temp’s User mode with its RGB sliders. There’s also a Low Blue Light mode designed to reduce eye fatigue when reading black text on a white background.

The GameAssist menu has a number of features to aid gameplay. You can place a crosshair at the center of the screen and customize its shape and color. Aorus info reports framerates and can provide countdown timers. A display alignment tool aids in the installation of multiple screens by providing a set of bright red arrows at the screen’s borders.

The CV27Q offers good image without calibration, delivering an accurate 6500K white point and spot-on gamma in its Standard mode. Our only gripe is that in SDR mode, you have to use the extended color gamut, which is over 86% of DCI-P3. This will appeal to users seeking more saturated color but isn’t strictly to standard. Using the sRGB image mode dialed back the gamut, but its gamma and white point were visibly off the mark.

If you want to extract that last 1% of performance, you can try our recommended settings below. We changed the gamma preset from Off to 3 and tweaked the RGB sliders to achieve a high standard.

We were anxious to see if the CV27Q’s HDR mode looked any better when playing Call of Duty: WWII than it did on the 1080p CV27F. Our review of the CV27F revealed a slightly elevated black level, which we had to compensate for in-game. The CV27Q didn’t display this behavior; its black level was nice and deep, giving the image the depth you’d expect from HDR gaming. That coupled with its QHD resolution made details pop nicely with a more textural look to the environment. Surfaces like worn metal or stone had a more visceral feel with HDR engaged. And we enjoyed this effect with FreeSync and G-Sync.

Framerates stayed strong at around 120 frames per second (fps) for HDR games and 140-165 fps when playing SDR titles, like Tomb Raider, using our Nvidia GeForce GTX 1080 Ti FE-equipped system. Even though the game is designed to be played on an sRGB screen, the monitor’s extended color gamut provided a positive effect. Though the extra saturation was apparent, there was no loss of detail, and highlights didn’t look overblown. We’d rather have an accurate sRGB mode, but the experience was still highly enjoyable, and most users will appreciate the extra, albeit inaccurate, color.

Keeping framerates high isn’t too difficult with QHD monitors. Our casual gaming skills were not enough to perceive a difference in response between the FHD resolution of the CV27F and the QHD screen of the CV27Q. And though the F delivered higher framerates, the Q showed 2ms less input lag, which will only be seen by the most-skilled players. The CV27Q is more than qualified for average competitive gaming use.

Like the CV27F, the CV27Q has an active noise cancellation (ANC) feature. The ANC feature uses two mics installed in the CV27Q’s front bezel that monitor background noise and apply the necessary correction to reduce the background noise others hear when you're speaking into an attached gaming headset.

In my office, you can usually hear the wind blowing outside and the rustling of trees. But with ANC activated, this sound was eliminated. It didn’t have a noticeable effect on sound quality, though. When there was a lot of background sound, we experienced some reduction in frequency response. Still, the ANC is a thoughtful feature that most will consider an enhancement.

Running Windows in HDR mode made the slightly green white point more obvious, so it’s unfortunate that it can’t be adjusted. There is also a barely-visible edge enhancement that we couldn’t remove because there is no sharpness control. We suggest reserving HDR for games and video only and keeping the Windows desktop in SDR mode. The toggle is easily accessible through the monitor’s Control Panel.