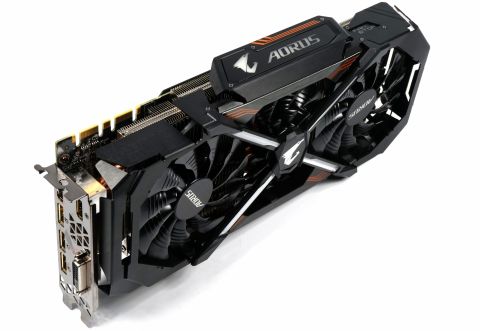 Manufacturers can claim whatever they want in their marketing material. Actually achievable clock rates are subject to a number of hard-to-control variables, though. GPU quality, for instance, plays a big role, and there's no way to pre-screen what you get on that front. So, it's absolutely possible that a nominally slower card made by one board partner ends up faster than a more aggressively-tuned model from another partner. As a result, comparisons between products have to be approached with an understanding of some inherent uncertainty.

Board vendors can, however, control the settings and environmental factors that affect how GPU Boost ultimately determines operating frequency, depending on the situations it encounters. Beyond specifications like the power target or clock offset, temperature under load is perhaps the most influential factor in defining sustainable performance.

For the Aorus GeForce GTX 1080 Ti Xtreme Edition 11G, we measured an initial GPU Boost frequency as high as 2012 MHz during our gaming loop. As the card warmed up, it maintained an average of ~1873 MHz during our 30-minute measurement.

With a slightly higher power target and more aggressive cooling settings, it's probable that 1.9+ GHz could be sustained inside of a closed case.

Of course, the card does tolerate some additional overclocking. In our case, we achieved a stable 2067 MHz under air cooling, though we did have to significantly adjust Gigabyte's fan curve to bring temperatures down. This results in extra noise you might not want.

If you plan to overclock, consider increasing the power target to at least 350W (by moving the slider from ~135 to 150 percent).

The table below contains results after configuring our card in Afterburner and a long test run in The Witcher 3. We achieved the values in the last row without bumping voltage up any further. However, we did have to manually increase clock rate by 50 MHz to get there.

As long as your temperatures stay under 149°F (65°C) during gaming workloads, 2067 MHz is feasible and can almost be permanently maintained aside from the occasional dip. The right water-cooling setup allows even higher clock rates. But we already mentioned that we won the GPU lottery this time around.

Getting a good overclock from your memory requires perseverance and a bit of luck. Seemingly stable settings might work short-term, and then prove dicey after a few hours of gaming. In the case of our sample, an extra 300 to 400 MT/s was feasible. Beyond that, performance started sliding the other direction.

Because the backplate plays an active role in cooling, it has to stay on for our measurements. We did lay a bit of harrowing groundwork, though. Before taking our readings, we removed the backplate and identified the card's hot-spots. This gave us the information we needed to drill holes into the plate, directly above those areas. These holes allow us to take precise measurements, even with the plate attached.

During gaming, the GPU remains below 71°C on an open bench table. That's not bad for a flagship graphics card. The rest of the board remains pleasantly cool as well.

In a closed case, the GPU's temperature rises to somewhere between 74 and 75°C, corresponding to the temperature target set by Gigabyte. At that point, the fans need to perform at their highest setting. The memory and VRM continue getting hotter, but the readings we observe are still fairly moderate.

The situation intensifies during our stress test. Here, the memory modules see an even higher thermal load than the GPU. Nevertheless, we don't flag any problems on an open test bench.

A closed case can't push the temperatures we measure into a critical range. The GPU stays right where Gigabyte wants it, and the other components remain in good shape. This certainly leaves some headroom for manual overclocking.

The Aorus GeForce GTX 1080 Ti Xtreme Edition 11G is extremely quiet on our open test bench, since its fans spin at low RPM. It's only when we drop the card into a closed case that the fans speed up, particularly as its GPU approaches 74°C. But even then, the fans operate at just under 1900 RPM.

We record similar rotational speeds during our stress test, with the same consequences.

Using our special temperature-controlled anechoic chamber, we took a maximum reading of 37.6 dB(A), which really isn't bad for a flagship 300W card.

This value can be a little deceptive, though. We initially suspected that those peaks in the 6 kHz range were attributable to the voltage regulators. But the noise was still audible at idle, as long as the middle fan was spinning. It stopped as soon as we stuck a finger in there. Other models don't have this flaw, so we borrowed the fans off of an older Xtreme Gaming card to confirm that fixes the problem.

If you don't push the power target beyond reason, this card's cooler does its job competently and unobtrusively. Even in a closed case, all of the on-board components remain cool enough to facilitate a bit of manual overclocking.