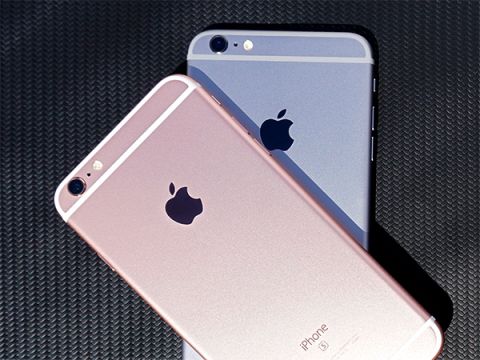 Battery life may be the most important performance metric for a mobile device. After all, it does not matter how quickly a phone or tablet can load webpages or how many frames per second the GPU can crank through once the battery runs down and the device shuts off. To learn more about how we test this critical facet of mobile computing, please read our battery testing methodology article.

Unfortunately, we do not have any tests that run realistic workloads for assessing battery life on Apple’s platform. Instead, we’ll have to bracket the value with two worst-case conditions supplemented with some subjective experience.

With both iPhone 6s models sacrificing some battery capacity (about 5 percent) to make room for the new Taptic Engine, there was some concern about a regression in battery life. Fortunately, the efficiency gains from using FinFET and lower-power LPDDR4 memory offset what’s lost from the smaller batteries. Looking at the battery runtime chart, it’s pretty clear that Apple has a specific battery life target it designs to. The iPhone 6s runs for the same amount of time as the iPhone 6 and 5s; the two Plus-sized versions are equal too.

While an increase in battery life would have been more impressive—not to mention more useful than maintaining a thin profile—the iPhone 6s still scores about the same as the Galaxy S6 here and a little better than the One M9. Subjectively, the iPhone 6s seems to have a slight edge over the Galaxy S6 in actual daily use. The S6’s larger 5.1-inch screen (versus the iPhone’s 4.7-inch screen) accounts for most of the difference. Both the 6s and GS6 can get you through a full day in most cases, but more demanding users will need to top off at some point during the day, especially with the GS6.

The larger iPhone 6s Plus scores 13 percent higher than the OnePlus 2 and Galaxy S6 edge+, and a more noticeable 43 percent higher than the LG G4. Like the iPhone 6 Plus before it, the 6s Plus gets excellent battery life. Even when on the go from 8am till midnight while attending a show like CES—constantly checking my email and calendar, taking pictures and notes, recording audio and video, chatting via Skype, looking up info on the web—the 6 Plus never required extra juice. So far, I’m seeing the same battery life from the 6s Plus.

Low Power Mode is a software feature introduced in iOS 9 that saves power by dialing back performance and features, allowing you to stretch battery life a bit further. Specifically, it reduces or turns off background data transfers (email, automatic store downloads, background app refresh), some visual effects, and Hey Siri. These are all transient events, however, making it difficult to assess their impact on battery life. The one aspect of Low Power Mode that Basemark OS II can measure is the impact of reducing the max CPU frequency.

By underclocking the CPU, Low Power Mode extends runtime in this test significantly. While we cannot determine the actual core frequency used in this mode, the frequency reduction seems to be proportional to CPU performance. In order to maintain an acceptable level of performance, the slower A7 SoC in the iPhone 5s sees a smaller frequency reduction than the much faster A9 in the iPhone 6s. The runtime extensions seem impressive here (71 percent for the 6s and 92 percent for the 6s Plus), but the actual increase in battery life will be far less since no real workload runs the CPU at 100 percent for several hours straight.

The other phones in this test all last longer than the iPhone 6s or 6s Plus, but that’s only because they exhibit moderate to heavy thermal throttling. The Galaxy S6, for example, throttles back to about 50 percent peak performance to keep from overheating.

While not shown here, we also ran this test with Apple’s Low Power Mode enabled. The new battery-saving feature underclocks the CPU but leaves the GPU frequency alone, since we saw no difference in performance or battery life in GFXBench. So basically, you cannot play games and extend your battery life too.

Performance stability while gaming is excellent for both devices. Performance does fluctuate quite a bit, but it never drops below 95 percent for the iPhone 6s or 92 percent for the 6s Plus, even after an hour running T-Rex. The phones do get noticeably warmer, though, with temperatures up about 9 °F over the previous generation. The maximum skin temperature for the 6s Plus reaches 120 °F, which is considered the upper limit for comfort.

It’s unfortunate we do not see an improvement in battery life, but given the A9’s performance gains, avoiding a large regression is not so bad. The iPhone 6s still does not include wireless or quick charging either, which makes charging a somewhat inconvenient affair.