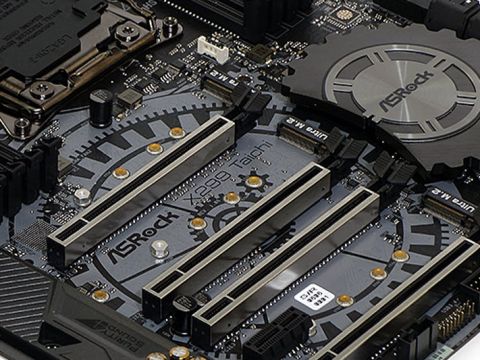 The ASRock installation disc still includes a full set of drivers, but recent versions of the disk have not included very much of ASRock’s custom software. To assure its customers that they have the latest version of various software packages, the company instead installs only a downloader application called “App Shop” that polls ASRock servers for remaining suites. Chief among these are ASRock RGB-LED Utility, App Charger modulation control software for quick charging Apple devices, A-Tuning overclocking suite, a custom interface for cFos packet prioritization called XFast LAN, and the Restart to UEFI shortcut.

App Shop will also poll ASRock servers for driver and firmware updates, if you choose. Another window lets you disable the auto run.

ASRock A-Tuning offers Windows users a variety of overclocking profiles that accesses firmware values and repeats them to the Windows interface, as well as an elaborate menu of custom settings that cover the full range of firmware capability. We found that frequency settings worked, but were unable to confirm core voltage changes.

Fan-Tastic Tuning also appears to have been lifted directly from motherboard firmware, in both cases allowing users to set programmed, user-configured custom, or cooling-program derived RPM to temperature slopes.

ASRock RGB LED software for Windows is a reflection of firmware settings, but didn’t function properly yet with this new X299 Taichi. The software didn’t address the board’s upper LED header, and changes to its settings caused it to quit functioning. Fortunately, the firmware menu works here.

Firmware is where the Taichi shined, but not in the easy OC section. The Turbo 4.2 GHz and Turbo 4.4 GHz setting appeared to have little impact on full-load performance, while using a danger-zone (according to Firmware) 1.90V input and no change in core voltage. The 4.6 and 4.8 GHz settings pushed input voltage even higher at 2.0 and 2.1V while increasing core voltage to 1.26 and 1.32V, respectively. Both of the higher settings caused throttling, though it’s not clear whether that was based on CPU or voltage regulator temperature, or default power limits.

(For more on this issue, read The Skylake-X Mess Explored: Thermal Paste And Runaway Power.)

This version of X299 Taichi firmware defaults to “Advanced” configuration menus, but the Advanced tab also allows users to set it to use “EZ Mode” upon entry.

Only two of the five fan headers can be switched from PWM to voltage speed-control, and both of those are rated at up to 1.5A output. The others are PWM-only and rated at 1A maximum output.

As with ASRock’s A-Tuning software, the X299 Taichi Firmware includes options to use several factory-programmed thermal fan-speed profiles, manual settings, or settings derived by the firmware during a fan test.

Finally, if you’d like to avoid complicated settings, an EZ-Mode menu is available by pressing F6. And, if you never want to see the advanced settings again, the menu to use EZ Mode every time is found in one of the menus of Advanced settings.