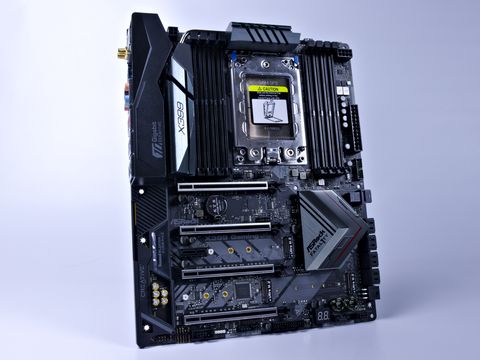 As we mention in our Gigabyte X399 Designaire EX review obtaining a maximum wattage power measurement for a system can be an art. Running idle, CPU- and GPU-specific tests are easy to get consistent results. But capturing instances of 100 percent utilization at 100 percent TDP can be difficult with resource sharing occurring across the system. With that said, the ASRock Fatal1ty X399 Professional Gaming motherboard scores well at idle and GPU load conditions, but does pull an extra seven watts compared to the Gigabyte X399 Aorus Gaming 7. Also, that seven watts turns into 10 watts at full load, while the Taichi and MSI boards boast impressive full-system load numbers. As with the performance section, the Taichi and Professional Gaming sport nearly identical PCBs. So for our purposes, we will only factor in idle, CPU, and GPU load numbers.

Our Fractal Design Celdius S36 cooler has remained firmly in the intake position for our Corsair 570X chassis after our launch article, and it’s clear that this position in this chassis is the preferred deployment. Coming in at 36.5C above ambient at full CPU load, the Fatal1ty reports the best CPU temperatures we’ve recorded in this section of the test. Also of note is that the VReg temperatures are noticeably warmer than the Taichi we tested in 2017, despite the same regulator implementation.

It should come as no surprise to anyone right now that such tight average performance metrics will lead to skewed efficiency charts due to overall power. Given the disparity in the total system stress values, we will be focusing on idle, CPU, and GPU metrics alone for efficiency purposes today.

Less than 0.8 percent separates all of the boards’ performance figures, so both ASRock boards are representing positive efficiency results. The Gigabyte and MSI boards both suffer from roughly 2 percent extra power draw, forcing their efficiency figures to be negative. It is good to see that ASRock continues to design and produce a product that is efficient, given the high horsepower available for the system.

Pricing is a critical balance for any vendor or retailer who wants to get stock off shelves and keep employees busy making new products. With the high cost of entry into the HEDT space, expect to pay the cover charge. Clearly, the ASRock X399 Fatal1ty Professional Gaming tops the MSRP charts around $450 at the time of writing, which is nearly $60 more expensive than competing boards. Even against its nearly identical sibling, the Taichi is about 25 percent less expensive.

But for high-end workstations, 10Gb is becoming a necessity. Having access to high-bandwidth network solutions without sacrificing PCIe slots or additional drives in a system make the price premium an excellent value proposition for any business needing high-bandwidth network connectivity. Though single-port 10Gb NICs are dropping in price (at least on eBay), not having to deal with add-on cards helps decrease bill-of-material needs for any larger scale network.

Luckily, we live in a world of sales. Despite the high MSRP, this board can be found for as low as $390, whereas less-expensive boards still linger in the $320 realm. Maybe the introduction of newer X399 boards will help drive prices down for builders.

As hyped as we are about this board, we feel the Fatal1ty and Taichi products should have swapped designs. Gamers don’t need 10Gb controllers, especially when they have to spend the extra money for the luxury. The Taichi board feels to more “professional” aesthetically, and likely could have grabbed a few willing wallets to pay the extra fee for the high-speed Ethernet. Both boards perform well and can overclock well in the right hands, but the 10Gb inclusion just isn’t enough to win over gamers--or to win any awards this time around.

Prev Page Overclocking – Memory, CPU, and Threadripper 2 Results
4 Comments Comment from the forums
Be In the Know