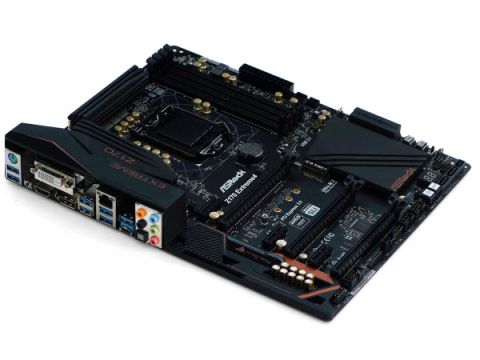 ASRock has removed most of its software from motherboard driver DVDs, instead relying on its Live Update utility to provide users the latest software of its applications. The company has even re-added its A-Tuning application to the downloads sheet of Live Update, and that probably means that updates for the Z170 PCH (and LGA 1151 platform) are complete.

Live Update also includes a BIOS & Drivers update utility, which checks the version you're using against the latest version on its update server, and scheduling, in case you'd like automatic update reminders. Classic ASRock apps include the Dehumidifier synthetic load cycling app (to remove condensation), USB Key for using a USB key as your login identifier, and the X-Fast RAM utility for creating a virtual drive partition on excess RAM. The above image is solitary this time so that interested users can click through (twice) to see it at full scale.

A couple of other things found on the DVD include X-Fast LAN traffic shaping by cFos and the associated applications for drivers. ASRock includes a DTS Neo PC with the Z170 Extreme4, which adds 5.1 and 7.1 virtualization to the traditional DTS Connect live multichannel encoding technology.

ASRock A-Tuning provides pre-defined overclock settings, automatic overclocking with stability tests, and manual overclocking controls. Auto Tuning runs automatically, but only got our CPU to 4.3 GHz; Optimized CPU Settings are copied from firmware and require a reboot, and Advanced Turbo adds a jump from DDR4-2133 to DDR4-2400 to the 4.6 and 4.7 GHz profiles of Optimized CPU OC.

A-Tuning's hardware monitor is a little better than the one found in firmware, but its System Browser and Fan-Tastic Tuning apps are nearly identical. Those apps are good in firmware, too.

Z170 Extreme4 firmware opens to EZ Mode, though there is a switch in Advanced Mode to change that setting. CPU EZ OC is a basic 4.4 GHz setting copied from Advanced-mode's Turbo 4.40 GHz setting at stock settings, and Turbo 4.6 GHz bumps maximum core voltage to 1.296V. Turbo 4.7 GHz and Turbo 4.8 GHz use 1.36V and 1.39V core settings with Level 1 Load Line Calibration to boost load voltage by up to 60mV beyond initial settings.

This particular Core i7-6700K sample routinely reaches 4.60 GHz at 1.30V, and the Z170 Extreme4 got it there with some voltage variation since the closest Load Line Calibration setting, Level 3, was still a little too aggressive. Dropping the core voltage setting to 1.28V fixed the over-voltage condition, but also pushed the CPU's maximum stable frequency to 4.45GHz. DRAM voltage was also a little high, where the 1.330V setting pushed 1.350V to the memory slot.

The Z170 Extreme4 has more than enough memory settings to reach super-high clocks, yet it couldn't even push the tested DDR4-3600 modules to a mere DDR4-3200. The best bet for performance and stability on this motherboard should be tightly-timed DDR4-2933 or DDR4-3000.Test

Prev Page Introduction, Specifications And Features Next Page Test Results, Overclocking And Conclusion
22 Comments Comment from the forums
Be In the Know