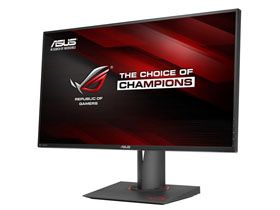 Unfortunately, none of the PG279Q's presets are accurate enough to eliminate the need for adjustment. Racing will get you close but brightness levels above 40 percent will look a little cool to the eye. In most gaming scenarios it isn't a big deal but we think out-of-box accuracy should be better in an expensive monitor like this.

The sRGB mode is cooler yet and you can't do anything about it. All adjustments including Brightness are locked out. If you're planning any color-critical work, this mode won't cut it.

After reducing green and blue, and dropping the Contrast slider eight clicks, we recorded an excellent grayscale tracking result. This is equal to many professional screens we've worked with. The PG279Q's performance potential is definitely there, it just needs to be coaxed out.

3.18dE represents a tolerable error level for grayscale accuracy but we think a premium product like the PG279Q should measure a little better out of the box. In this group of gaming screens it isn't too far out of the running though.

Both of Asus' IPS gaming monitors are capable of professional-grade accuracy. All you need is a calibration; or use our settings to get within a whisker of these numbers.

We were initially perplexed at the PG279Q's default gamma tracking result. Levels from 70 to 100 percent are much too bright; to the point where detail above 80 percent is wiped out. This results in a lot of white blobs on the screen rather than crisp highlight detail. In games where the image is always bright (outdoor maps for example), it'll be much harder to pick out small objects. Luckily, we found the fix by reducing the Contrast slider.

Gamma still rides towards the dark side but it's far better now that the brightest levels are where they should be. Detail has been restored and image has good depth and clarity. As you'll see on the next page, this adjustment improves color accuracy too.

Even after our adjustments, the PG279Q lags a little behind the others. A .22 range of values isn't bad but like the grayscale tracking, it could be better at this price.

While tracking is fairly level, the luminance values are a little too dark to meet the 2.2 standard. There is no loss of detail here but the ROG Swift has just a bit less pop than the other screens. Note that gamma performance seems to be independent of panel tech. A TN display takes the top prize in this test.