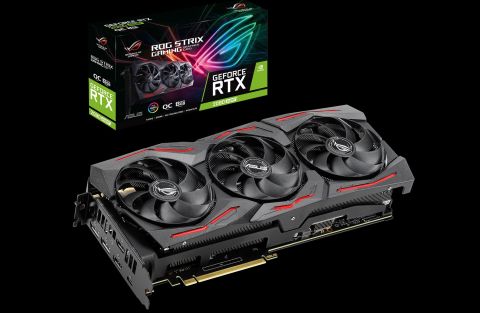 We used GPU-Z logging to measure each card's power consumption with the Metro Exodus benchmark running at 2560x1440 using the default Ultra settings. Future reviews will use Powenetics to record the real graphics card power consumption, but we tested the Asus card before the Powenetics hardware setup was ready.

We warm up the card prior to testing, and logging is started after settling to an idle temperature (about 10 minutes). The benchmark repeats a total of five times, which yields around 10 minutes of testing. In the charts, you'll see a few blips in power, temperature, fan speed, and clock rate that are a result of the benchmark ending one loop and starting the next.

During gaming, the Asus ROG Strix RTX 2080 Super OC averaged 246W, the highest of the three RTX 2080 Supers. The EVGA Hybrid card averaged 238W while the Founders Edition was the lowest at 232W. You wouldn't notice the power consumption difference between these cards on your electric bill, and the Asus larger cooler easily mitigated any additional heat from the increased power use.

Temperatures during game testing reached a peak of 62C on the Asus ROG Strix card, which is 9C more than the EVGA Hybrid's 62C. Not surprisingly, the 2080 Super FE had the highest peak temperature of 72C. Nvidia's FE fan curve tends to be a bit conservative, opting for lower noise and higher temperatures. The larger cooler and triple fan setup of the Asus card easily beats it — provided of course that you have room in your case for such a large graphics card.

Fan speeds for the three RTX 2080 Super cards were relatively similar. The Asus ROG Strix hit 1,750 RPM and the Founders Edition ran faster at 2,000 RPM, while the EVGA card was slower at around 1,700 RPM. Note that the pump noise on the EVGA actually eclipses the fan noise, however, so fan speed isn't the only consideration.

Average clock speeds for the Asus ROG Strix 2080 Super OC come in at 1,988 MHz, only five MHz behind the EVGA Hybrid card. That's mostly thanks to temperatures, as the hybrid card kept the GPU cooler than the air-cooled Asus. The RTX 2080 Super FE meanwhile clocks at an average speed of 1,929 MHz.

We also use FurMark to capture worst-case power readings. Although both Nvidia and AMD consider the application a "power virus," or a program that deliberately taxes the components beyond normal limits, the data we can gather from it offers useful information about a card's capabilities outside of typical gaming loads. For example, certain GPU compute workloads including cryptocurrency mining have power use that can track close to FurMark, sometimes even exceeding it.

The differences between the cards shrank considerably when testing power use with Furmark. Both the EVGA and Asus RTX 2080 Supers averaged 247W while the Founders Edition made a big jump to 248W. Not surprisingly, at stock settings all three cards land close to the expected 250W recommended TDP.

Temperatures when running Furmark weren’t much different than during the gaming test. Nvidia cards tend to throttle hard when running this stress test, so temperatures tend to be somewhere around what we found during the gaming test.The Asus ROG Strix 2080 Super peaked at 61C, the EVGA Hybrid at 53C, and the 2080 Super FE at 75C. All coolers are able to keep the cards running here, though the enhanced cooling on the Asus and EVGA cards definitely makes a difference.

Like temperatures, not much changed with fan speeds. Fan speeds ramped up smoothly on the three cards, trying to manage thermals. Fan speed on the Asus card topped out at around 1,750 RPM, the EVGA card comes in just under 1,700 RPM, and the FE remains at the top (worst) spot with a slightly higher 1,850 RPM this time.

Clock speeds during Furmark dropped tremendously on these Nvidia video cards, as is normally the case. Here the the Asus ROG Strix averaged 1,776 MHz, which is quite a bit lower than the EVGA hybrid's 1,819 MHz but still above the Founders Edition's 1,677 MHz. A FurMark workload isn't typical of gaming use, however, so users can expect clock speeds during gaming to be closer to the Metro results.