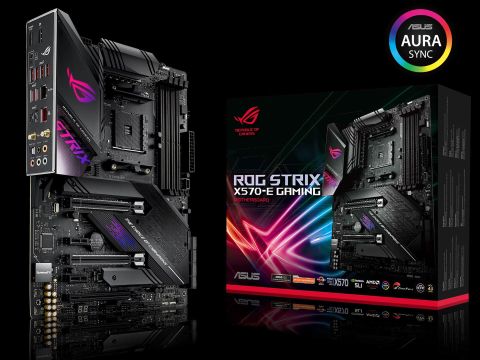 Manual overclocking is achieved through the Ai Tweaker menu of the Strix X570-E Gaming’s Advanced mode GUI. Choosing D.O.C.P as the overclocking mode allows the board to select memory frequency and timings based on the module’s XMP programming prior to manual tuning.

We got to those high data rates by manually configuring 20-21-21-21-42 primary timings, which were chosen long ago based on the notion that we wanted to hit DDR4-4200 at a reasonably-quick one-latency cycle for every 200 MHz data rate.

The Digi+ VRM menu provides the CPU Load Line Calibration setting we needed to get our memory to stay near our 1.366V target at full CPU load. Its Level 5 setting perfectly matched our needs.

Software is required to control the Strix X570-E Gaming’s RGB lighting and headers, though users can turn all the lights off from the Onboard Devices Configuration submenu of the Advanced menu.

All seven of the Strix X570-E Gaming’s fan headers can be switched between PWM and voltage-based RPM control, and each can be set to a factory-programmed profile or manually configured. Asus’ Qfan Tuning adjusts the board’s programmed profiles to match the limits of each fan.

The Strix X570-E Gaming’s Tool menu includes a shortcut to an integrated firmware-flashing utility, an SSD erase tool, eight registers to store customized firmware settings and an import/export function to store and retrieve these on a USB flash drive.

Asus offers and EZ Mode interface to users who get lost in all the options of Advanced Mode. Toggling between GUIs is as easy as pressing F7 at the top of a keyboard.

We’re including all formerly-tested X570 motherboards, along with the X470 we started with, in our Strix X570-E Gaming evaluation.

Even the cheaper X570 Taichi—which still costs $300—has a range of CPU core voltage levels that far exceed the levels coolable with water, and that sets us up with a great way to compare hardware capability to motherboard stability.

Three boards reached our CPU’s liquid-cooled limit of 4.20 GHz, including the Strix X570-E Gaming. The Asus board took second place in memory overclocking with two modules installed, but it tied ASRock for last place when all four modules were in place.

Performance is the point of overclocking, and with memory being the only thing our Ryzen 7 3700X can overclock well, bandwidth shows that ASRock got the most punch for its data rate. Asus’s DDR4-3733 setting appears to be far less aggressive than ASRock’s, resulting in a 2.5% bandwidth deficit. Since each board adjusts its advanced timings automatically to provide stability when exceeding the memory’s XMP values, we assume that starting out with a DDR4-3733 kit would have given us different results.