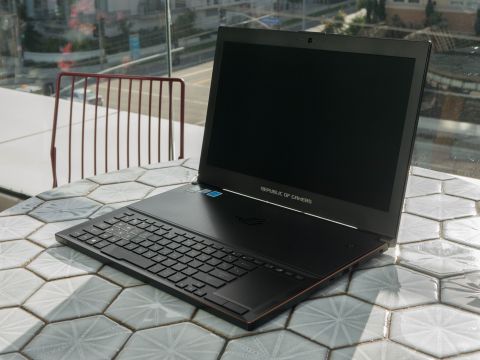 The Asus ROG Zephyrus features a 4-cell, 50Wh lithium ion battery—the same one used in the GTX 1080 Max-Q iteration of the Zephyrus; we found it to be inadequate for the 1080 GPU's needs, even with Max-Q's efficiency. This time around, the 50Wh battery only needs to cater to a GTX 1070 Max-Q, so battery life should be better, right? Yes. The less power-hungry GTX 1070 Max-Q increases the Zephyrus battery life by about 11 minutes. Better, but not much in the grand scheme.

The Eurocom Q5 delivers five more minutes of game time thanks to its larger 60Wh battery. Meanwhile, the MSI Raider has a similar sized battery (51Wh) as the Zephyrus, but its non-Max-Q GTX 1070 consumes more power, thus dragging it down by five minutes.

Normally, we use our Optris PI 640 infrared camera to measure the laptop’s thermals. We had trouble accessing the cooling system in the Zephyrus interior, so instead we logged its temperatures using GPU-Z. For more information about how we test, be sure to check out our Measurement Science article.

Another benefit of this GPU is less heat generation. While the Zephyrus cooling solution adequately cooled the GTX 1080 Max-Q, it wouldn't hurt for it to run a bit cooler. This time around it does, never exceeding 70° C. In fact, it runs more than 10° C cooler than the GTX 1080 Max-Q's maximum temperature.

We used the SpectraCal C6 Colorimeter to measure the Zephyrus display. Be sure to check out our Display Testing Explained article for a full description of our test methodology.

The Zephyrus has several color profiles to choose from in ROG Gaming Center. We used the default sRGB profile during our testing.

Asus uses the same display panels on its Zephyrus models, so don't expect drastic differences. In this case, that's a good thing, as the previously reviewed Zephyrus exhibited outstanding performance all around. The contrasts are just as great with a high minimum contrast ratio of 1220.2:1. Similarly, the maximum contrast ratio is an outstanding 1244.8:1.

Grayscale accuracy is intricately tied to RGB levels, and in this case you'll only notice grayscale errors at 100% brightness, where red and green levels are recessed and blue levels are overemphasized. Grayscale accuracy is measured in DeltaE 2000, with values lower than 3 being imperceptible. From 90% brightness and below, you won't notice the grayscale errors. The average DeltaE 2000 is an incredibly low 1.769.

Gamma is a measure of a display's saturation, with a gamma point of 2.2 representing a well-saturated display. The gamma point chart illustrates a rather straight line, meaning that saturation doesn't shift much while changing display brightness. However, the gamma point hovers slightly below 2.2, resulting in minor undersaturation.

Like grayscale accuracy, overall color accuracy is measured using DeltaE 2000. There are relatively few color errors, especially at lower brightness. However, as we raise the brightness, several errors rear their heads, notably greens, cyans, magentas, yellows, and especially blues. This is only noticeable at maximum brightness, and the average color accuracy measures a Delta E2000 of 3.4115. Quite good.