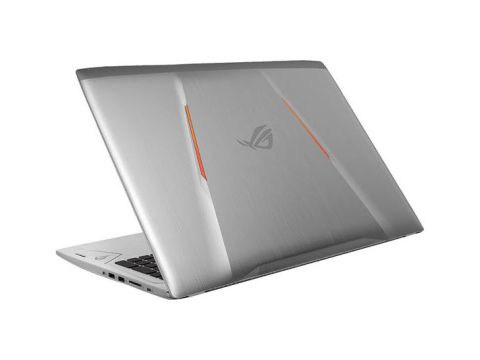 During our Acer Aspire VX 15 review, we included test results with reduced settings whenever a system struggled to maintain 45 FPS. Luckily, Alien: Isolation isn't a very demanding title, so the Asus Strix GL502VS-DS71 scores well in excess of 100 FPS. With frame rates this high, the differences between the systems almost don't matter, but for our purposes (and yours), the EVGA delivers 5 extra frames, or about 3% more performance than the Strix. The Kaby Lake CPU gives the Asus a 7 FPS performance boost over the Acer Predator, which only amounts to a 4% performance increase. The biggest differential for the Asus laptop is against the Sager NP8156, which runs about 25% slower because of its GTX 1060.

Ashes of the Singularity, on the other hand, is much more taxing than Alien: Isolation, so don't expect an abundance of frames. Once again, the Strix 15 plays second fiddle to the EVGA SC17, which performs about a frame and a half better due to its i7-6820HK. Meanwhile, the Acer Predator 17, which still uses a 6th generation i7 CPU, trails by a few frames. With GTX 1070-based systems such as the Asus, Acer, and EVGA laptops, you can maintain an enjoyable frame rate at high settings, or bump up your performance past 60 FPS with minimal adjustments. Comparatively, the Sager NP8165 struggles to maintain 40 FPS.

Similarly to Alien: Isolation, Bioshock Infinite is easy to run on all modern systems, so there's no need to dial back your settings. The SC17 takes first place yet again, but this time, the Predator overtakes the Strix laptop for second place. The Asus only loses by a couple of frames, however. The Sager laptop delivers around 13% lower frame rate.

DiRT Rally is a tad more demanding than Bioshock Infinite, but the trophy placements remain mostly the same (the Predator overtakes the EVGA laptop in this game, however). The Strix 15 outperforms the NP8156 yet again due to its more robust GTX 1070. However, the performance difference is much greater; the Asus delivers 20 additional frames, which amounts to a 26% performance increase over the GTX 1060-based laptop. As a result, the NP8156 falls just below 60 FPS, whereas the Strix has plenty of performance to spare. Playing DiRT Rally at optimal performance without graphical compromises requires at least a GTX 1070 laptop.

Grand Theft Auto V has a variety of benchmark scenes, some of which are relatively easy to render, and others that stress systems without the graphics horsepower. A GTX 1070 is sufficient in all but GTA V's most demanding scenes. In fact, Asus Strix 15 maintains over 50 FPS in almost all of the scenes, and during the Del Perro Pier scene in particular, earns over 60 FPS. The Vinewood Sign scene, however, is incredibly taxing because it renders distant landscapes and objects, and here the Strix's average frame rate falls to 37 FPS. Reducing your settings to normal will make the Vinewood Sign scene a cakewalk to render.

Performance in GRID Autosport is mostly platform-based, but GPUs with high clock rates receive a considerable boon. This is most apparent when comparing the Acer Predator 17 and Sager NP8156; the former has the lower-clocked GTX 1070 (1683MHz), and latter uses the GTX 1060 (1708MHz). However, the Asus Strix 15 has the luxury of a 7th generation core-i7 processor, which gives the Strix an 8% performance boost over the Acer, thus widening the gap between it and the Sager. A GTX 1060 won't clinch a win against a GTX 1070-based laptop, but it'll give it a run for its money.

In most cases, Hitman is unforgiving without adequate GPU power. For example, the Dell Inspiron 15 1000 and Acer Aspire VX 15 couldn't come close to handling this game at high settings. With sufficient graphics horsepower (like a GTX 1070), additional CPU power will be the more cost effective way of increasing Hitman performance, rather than jumping up to a GTX 1080. For example, going from an i7-6700HQ to an i7-7700HQ (Predator 17 vs. Strix 15) will net you around 18% better performance. Climbing from a locked processor to an unlocked processor will produce similar gains.

In Metro: Last Light Redux, raw GPU horsepower is the name of the game, and the GTX 1070 has plenty of it. As such, the GL502VS-DS71 maintains over 60 FPS with some extra performance to spare. Unlike Hitman, performance won't improve much from a stronger processor. The Asus Strix's i7 only offers 1% additional performance over the 6th-generation Intel CPU in the Acer Predator.

Rise of the Tomb Raider is similar to Metro: Last Light Redux in that GPU power is paramount for adequate performance. There's a minuscule performance difference between the Acer, Asus, and EVGA laptops, with the Asus Strix outperforming the Acer Predator by 6%, while the EVGA system outperforms the Asus model by 1%. However, unlike in Metro, the GTX 1070 cannot maintain 60 FPS in Rise of the Tomb Raider at high settings. Still, if a value-oriented GTX 1070 laptop is what you're looking for, the Strix 15 will give you the best performance for your dollar, and dialing back anti-aliasing will pull your average frame rate past 60 FPS.

We have GPU-hungry title in The Division, although this time, Intel's Kaby Lake architecture benefits the Asus Strix just enough to clinch first place. The difference amounts to a 4% improvement over the Predator 17 and a 1% improvement over the SC17 and its unlocked i7-6820HK, so ultimately, a powerful CPU won't benefit your Division performance all that much.

To top it off our gaming benchmarks, the Strix 15 takes second place yet again during Thief's built-in benchmark. This isn't a major issue, considering the EVGA and its i7-6820HK only outscore the Strix by 3%. Furthermore, high frame rates are easy to achieve in Thief, so you don't have to fight tooth and nail for every last frame. Given that, you could even consider a lower end laptop such as the NP8156. You'll sacrifice nearly 20% of your performance, but you'll still maintain a respectable 78 FPS, which is more than enough if you don't intend to play games much heavier than Thief.

Prev Page Synthetic Benchmarks Next Page Battery, Thermal & Display Testing
12 Comments Comment from the forums
Be In the Know