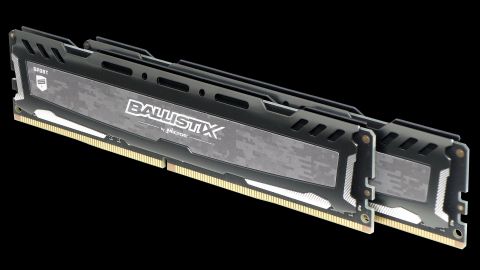 With compatibility settings for nearly every Intel DDR4 desktop platform, the Ballistix Sport LT DDR4-2666 kit could be the best memory for sellers attempting to reduce their rate of returns. But for builders who know precisely what they need, there are better options out there.

When Intel says no overclocking, they mean no overclocking, which is frustrating given the company has decided that any memory over DDR4-2666 is overclocked, despite the industry’s approval of modules up to DDR4-3200. Perhaps the company didn’t have that much faith in its own memory controllers. Or perhaps it wanted to leave a little more performance on the table for buyers of is Z-series chipsets. Either way, DDR4-2666 is your CPUs limit if you’re running a motherboard with a H370 or B360 chipset. And that’s a best-case scenario. Every CPU from a Core i3 down gets stuck with a maximum of DDR4-2400.

Crucial, owner of the Ballistix Gaming brand, has always focused on compatibility. Thus, if your H370 or B360 board doesn’t have an XMP option for stepping up your memory speed, the company still wants you to get your DDR4-2666 data rate. It’s part-number BLS2K8G4D26BFSBK kit includes an ample three non-XMP configurations for DDR4-2666 (CAS 16, 18, and 20), along with one DDR4-2400 non-XMP (CAS 15) and various lower speeds, including the common low bar of DDR4-2133.

This means that owners who find out too late that their lower-model processor doesn’t support DDR4-2666 can still run DDR4-2400 at somewhat-reasonable timings, without the need for XMP. On the other hand, the XMP option with this kit doesn’t appear to provide any enhancement over the non-XMP DDR4-2666 setting. And at DDR4-2666, its 16-18-18-38 timings appear rather mediocre.

Of the four other DDR4-2666 kits we’ve reviewed recently, only the Vengeance LPX suffers from the same mediocre timings as Ballistix Sport LT, but the Vengeance kit has the performance advantage of two ranks (64-bit groups of DRAM chips) per DIMM. Each of the single-rank kits has some marketing advantage to call its own, from the HyperX’s CAS 13 timings to the Viper Gaming’s RGB. The G.Skill Ripjaws V competes most closely with Ballistix Sport on price, yet the Ripjaws kit configures to a slightly-tighter CAS 15.

Locked frequency limits prevent overclocking, but those who want a little more performance are still welcom to try reducing latency for quicker response time. Unfortunately, the Ballistix Sport LT reached only CAS 14 at a speed where nothing short of CAS 13 should be considered low-latency.

The Ballistix kit suffers with similar lazy timings as the Vengeance LPX, but without the competitor’s dual-rank performance advantage. With the next-worse timings and only a single rank per DIMM, the Viper Gaming kit is the only other option held below 27GB/s at XMP settings.

By the time we reach our F1 2015 results, we can see where all of this is going: The dual-rank kit will win despite its poor timings, and the worst-timed single rank kit, the Ballistix Sport LT, takes the loss.

The Ballistix Sport LT takes another hit in 7-Zip file compression, where it’s the slowest to compress our test file. The CAS 13 latency of the HyperX Predator kit puts it in first place at XMP, though the Vengeance LPX wins by an even greater margin when all five kits are tweaked to their lowest stable latency settings.

Until recently, the Ballistix Sport LT could at least claim a value win by being the cheapest option here, but then G.Skill dropped its prices. The only advantage left to earn Ballistix Sport any additional recognition is its broader compatibility, as the G.Skill kit has no programed configuration between DDR4-2133 and its DDR4-2666 XMP.

We wouldn’t want to apply the “for dummies” label to any of the parts from an enthusiast-oriented brand. But the Ballistix Sport LT DDR4-2666 kit is the most foolproof 2666 kit we’ve tested, edging out the HyperX Predator in its compatibility settings, and at a far lower price. But it also has far worse timings and doesn’t even have similar tweaking ability, so in the case you really do get what you’re paying for. And if you know exactly what your motherboard and CPU are capable of on the memory front, you should probably opt for an alternative to this kit.