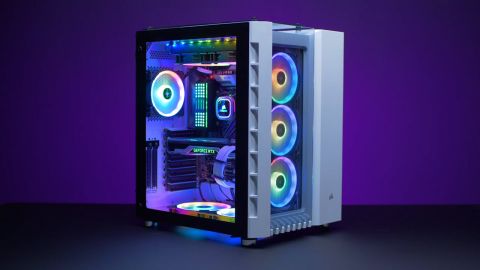 A small brown box containing a variety of screws and zip ties comes secured in one of the case's open 3.5-inch drive bays. The case manual and large magnetic dust filter for the top of the case can be found on top of the PSU tunnel.

This chassis features a true dual-chamber design that separates heat generating components (motherboard, processor, graphics cards) from cooler components (hard drives and PSU). This type of layout allows for more than enough room for a variety of system builds, all the while maintaining an extremely clean look.

The interior of the Crystal 680X RGB is painted to match the exterior. There are a total of nine large cable pass-through holes with rubber grommets in the motherboard tray, along with three smaller holes at the bottom edge with rolled-metal edges. The ATX12V/EPS12V power cable and fan cables can be routed through one of the two grommet-lines holes at the top of the motherboard tray.

The eight (plus two vertical) expansion slots will accommodate graphics cards up to 330mm (13 inches), even in multi-GPU configurations. The vertical VGA GPU slots allow builders to install a PCIe x16 riser cable (not included) to show off a fancy GPU by mounting it vertically. You can use CPU air coolers up to 180mm (7,08 inches) tall in this case.

When it comes to storage options, the 680X RGB can accommodate up to three 3.5-inch hard drives and a total of four 2.5-inch SSDs. The SSD drive cage can also be reconfigured for use with one, two, or three SSDs, depending on your needs. All drive bays are located in the secondary compartment and are attached to the back panel of the case.

All drive bays in the 680X RGB are completely tool-free. The three 3.5-inch bays feature plastic drive caddies with pegs that hold the drive in place. Adding an SSD drive is a simply matter of sliding a drive into an open slot until it snaps into place.

It was a bit disappointing that Corsair didn’t include a LL120 ARGB exhaust fan given this chassis’ emphasis on RGB lighting (and the fairly high price). Overall the 680X RGB can be equipped with a total of eight 120 or seven 140mm fans.

Corsair employs the use of removable fan / radiator brackets in the top and front of the case that makes installing a radiator or all-in-one (AIO) cooler a breeze. After loosening the two thumbscrews, it's simply a matter of removing the bracket, installing your components and sliding the entire setup back into your system.

Radiators and AIO coolers can be mounted in the top, front, bottom and rear of this chassis. The mounting locations in the front of the chassis support 120, 140, 240, 280 and 360mm radiators. Radiators and AIO coolers up to 140mm can also be installed in the exhaust-fan mounting location. The front, rear and bottom locations all support dual-fan configurations (with the radiator sandwiched between fans in a push-pull configuration) up to 280mm.

Lighting modes such as ARC, Color Warp, Heartbeat, Rainbow Wave and Static are just a few of the profiles. If you aren't into all the “cool” effects, but still want a nice solid color added to your system lighting, a feature called Instant Lighting gives you one-click access to a range of colors including red, orange, yellow, green, white and more.

Although Corsair lists support for power supplies up to 225mm in length, there's actually no real size restriction. The bottom of the secondary compartment is completely open, making it possible to install extremely large PSUs such as the 1600W EVGA SuperNOVA (225mm) without encountering clearance issues.