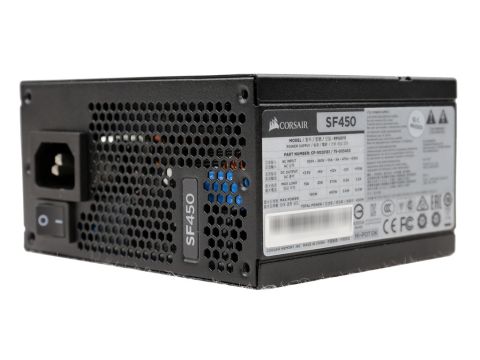 Using results from the previous page, we plotted a chart showing the unit's efficiency at low loads, and loads from 10 to 110 percent of its maximum-rated capacity.

The SF450 Platinum only loses to its big brother under normal loads. Under light ones, it takes the lead with an almost 2% difference.

In the following tests, we measure the PSU's efficiency at loads significantly lower than 10 percent of its maximum capacity (the lowest load the 80 PLUS standard measures). The loads we dial are 20, 40, 60, and 80W. This is important for representing when a PC is idle, with power-saving features turned on.

The efficiency levels achieved under light loads are jaw-dropping. Even with 20W, we measure over 76% efficiency. With 80W, our power analyzer shows an almost-90% reading.

The SF450 Platinum obviously uses the same 5VSB circuit as its big brother. Thanks to the smaller parts it uses in certain circuits, which lead to lower energy losses, it achieves higher efficiency at 5VSB.

Both SF Platinum models consume very little vampire power. This is the safest way to achieve high efficiency at 5VSB under light loads.

The following graph illustrates the fan's output noise over the PSU's operating range. The same conditions of the above graph apply to our measurements, though the ambient temperature is between 30°C (86°F) to 32°C (89.6°F).

The semi-passive mode doesn't last long because we push the minor rails hard during these tests. Apparently, they need active cooling under high loads. But the fan profile is still relaxed overall, especially when we take this PSU's tiny size into account. The maximum noise output doesn't exceed 35 dB(A), and you have to push the unit with more than 420W to get there. That's close to its nominal capacity.