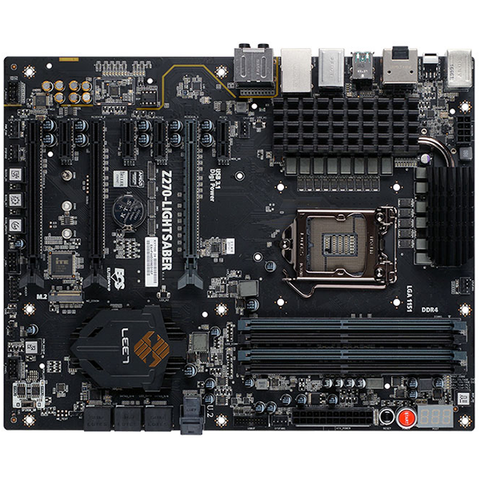 The latest Z270-Lightsaber firmware is dated 04/06/2017, but it’s not likely an accurate build date, since the boards weren’t around back then. It could be the date of the core firmware upon which ECS’ modifications were applied, however.

The Z270-Lightsaber UEFI isn’t hotkey enabled, so navigation requires using either a mouse or arrow keys. Clicking the “Advanced” button above (or navigating by arrow key to it and hitting “Enter”) brings us to traditional BIOS-style menus.

The “Advanced” tab is the first place we need to stop, since the firmware’s default settings don’t support PCIe boot discs such as our Toshiba/OCZ M.2 SSD. The necessary change will be found under its SATA Configuration sub-menu.

It’s OK to leave RAID mode enabled, but getting the board to recognize PCIe-based storage requires disabling Intel RST on “Port 17.” The bottom of the screen shows M.2 as “Not Present” but appears to be referring to SATA-based drives.

Fan settings are found under the PC Health Status sub-menu of the Advanced menu. Custom slopes can be configured using temperature settings and math. The board’s fan control is compatible only with PWM fans.

Overclock settings are found under the ECS Motherboard Intelligent BIOS X menu, which also has a short list of detected stats.

Capable of reaching 4.80 GHz at 1.300V at optimal conditions, our CPU scaled to only 4646 MHz at 46x 101 MHz on the Z270 Lightsaber using that same voltage setting. This appears to be a good place to mention the board’s Quick-OC button, which brought us 4726 MHz at 45x 105 MHz using a 1.32V CPU core setting. It appears voltage sag (aka “vdroop” by seasoned overclockers) of up to 80mV at full AVX-based CPU load was the cause for CPU core overclocking shortfalls.

The Z270-Lightsaber includes a complete set of memory timing controls, but doesn’t fully support the high DDR4-3866 rating of our G.Skill test modules. Switching from Default Profile to Custom Profile left default CAS 15 timings, but switching from XMP Profile to Custom Profile caused the board to keep the XMP timings of these modules. With those in place, the board was stable up to DDR4-3333 with two modules, and DDR4-3232 with four modules.

The DRAM setting above of 1.340V produced a meter reading of 1.355V at the DMM slot. That’s our test limit, as allowing a manufacturer to play excessively with voltage could give it an unfair advantage when comparing stability.

The surprisingly sparse RGB LED sub-menu is found under the overclocking main menu, which is equally surprising. Another surprise is that this RGB board has only two color-controlled LEDs, and no RGB light strip headers.

Users can save their complete set of firmware customizations as a profile for later retrieval, which could come in handy if you’re forced to use the CLR_CMOS button on the Z270-Lightsaber’s I/O panel.

Speaking of CLR_CMOS, the Z270-Lightsaber takes around 30 seconds to boot after firmware is cleared, and only resumes normal operation after the user has entered UEFI and saved settings. That can be a problem, because the board often hangs upon pressing the Delete key to enter setup the first time. We were typically forced to power cycle the system 2-3 times before being able to enter UEFI and save the initial configuration.