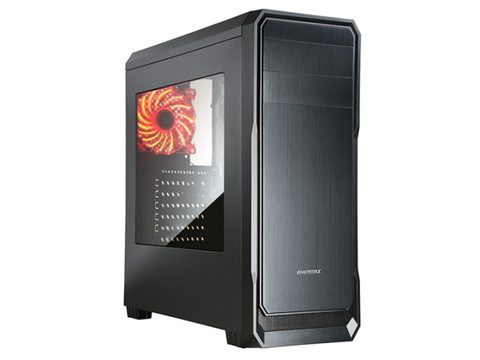 Accessories come in a plastic bag zip-tied to the motherboard tray. You will find various screws, zip ties, and an owners manual.

The interior of the chassis is large enough to support up to ATX motherboards. The seven expansion slots will accommodate 3-way SLI and CrossFire, but we don't see many people buying an entry-level mid-tower case like this to house a triple GPU set-up. Nevertheless, there is more than enough room for most dual GPU configurations and long graphics cards up to 16.7".

At the bottom of the main compartment you will find a large non-removable PSU tunnel that covers your power supply and two drive bays. Because of the size and position of the side panel window, the PSU cover is a bit redundant; you can't actually see the PSU with the side panel in place. Additionally, there is an 82/92mm fan mounting location on the top of the PSU tunnel near the front of the chassis.

The Ostrog Lite is equipped with two space saving 5.25" optical drive bay slots in the main component compartment. As you can see from the photos, the cut-away design of the 5.25" drive bays allows optical drives to be supported in the front, while holes in the motherboard tray let you attach the rear of your optical drives to the chassis frame. This case is equipped with a removable plastic 5.25" drive bay adapter so you can mount a 3.5" drive or 80mm fan in the optical drive bay area. Two of the four hard drive mounting locations are placed behind the motherboard tray and support both 2.5" and 3.5" drives via plastic hard drive caddies. The case also features a pair of dedicated mounting locations for 2.5" SSDs on the motherboard tray in the main component compartment.

The Enermax Ostrog Lite is outfitted with a single 120mm intake fan in the front of the chassis and a 120mm Enermax Apollish LED fan in the rear of the case near the CPU socket area. In total, you can install up to five 120mm, one 80mm, and one 82/92mm fans. The mounting locations on the top and front of the case can accommodate up to two 120mm fans. The rear exhaust fan location supports one 120mm fan.

Although things were tight, we were able to install several different power supplies up to 220mm in length without issue. Any time there's limited space behind the motherboard tray, we highly recommend using a modular power supply. The Enermax Ostrog Lite can be equipped with coolers up to 152mm tall and can accommodate graphics cards up to 390mm in length.

Even though the Enermax website lists only one location for mounting radiators in this chassis, we found that radiators and all-in-one coolers can actually be mounted in three separate locations. The mounting locations in the top of the chassis support 120mm and 240mm radiators, as do the mounting locations in the front of the chassis. Finally, a 120mm all-in-one cooler can be mounted in the exhaust fan location.

The 120mm intake fan in the front of the case feeding the 120mm exhaust fan in the top of the chassis didn't seem to provide adequate airflow. This is likely due to the air intake slot at the bottom of the front fascia restricting airflow. Also, the airflow into the chassis is divided by the PSU tunnel. Although this type of design provides airflow to the hard drive racks, it diverts airflow away from the hotter components that need it most.

Those of you with plans to internally mount a 240mm all-in-one cooler can do so in mounting locations in the top and front of the chassis. Even though most all-in-one coolers can be physically mounted in the front of this chassis, due to the fixed length of the tubing, some coolers are unable to reach the CPU socket. However, these locations are ideal for mounting radiators for water-cooled graphics cards. The rear exhaust fan location behind the CPU socket area supports 120mm radiators and all-in-one coolers in single and dual fan configurations.