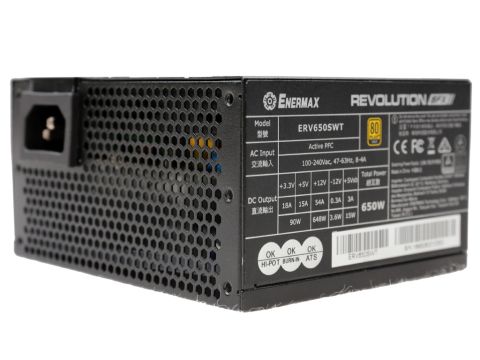 The following graph shows the ERV650SWT's total performance rating, comparing it to other units we have tested. To be more specific, Enermax's 650W PSU is shown as 100 percent, and every other unit's performance is shown relative to it.

The ERV650SWT achieves the same (rounded) performance score as FSP's Dagger 600W unit. Although this is a decent-performing platform, it can't match the performance of Corsair's SF600, the current king of SFX PSUs.

The following chart may be the most interesting to many of you because it depicts the ERV650SWT's performance-per-dollar score. We looked up the current price of each PSU on popular online shops and used those prices and all relative performance numbers to calculate the index. If the specific unit wasn't available in the United States, we searched for it in popular European Union shops, converting the listed price to USD (without VAT). Note that all of the numbers in the following graph are normalized by the rated power of each PSU.

Higher capacity, an 80mm-diameter fan, and a strict profile combine to cause high overall noise output. If Enermax used a 92mm fan, this wouldn't be as much of a problem.

An overall efficiency score below 88% inevitably leads to an ETA-A certification in the Cybenetics scale. We would like to see a better result from Enermax.