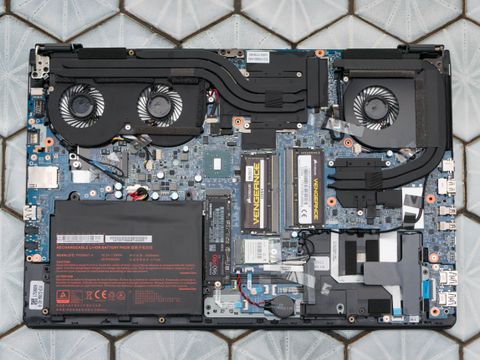 Now for the competition.

The best point of comparison is undoubtedly a full-fledged GTX 1070, so we’re including the recently reviewed MSI GE63VR Raider. It also features an i7-7700HQ, but comes with 32GB of DDR4-2400 memory, a 512GB M.2 SSD, and a 1TB 7200 RPM HDD. It has a FHD 120Hz matte display with a 3ms response time. We expect the Eurocom Q5 to provide at least 85% of the Raider's performance. The Raider is much thicker, and therefore has a more robust cooling system; if the Q5 falls down on controlling heat, that performance gap could be wider.

The second laptop in our comparison is the Asus ROG Zephyrus, which features a GTX 1080 with Max-Q Design. It contains an i7-7700HQ, 16GB of DDR4-2400 memory, and a 512GB M.2 SSD. Its display is a 15.6” FHD anti-glare IPS panel with G-Sync and a 120Hz refresh rate. As the first Max-Q laptop we tested, we were pleased to find that the Zephyrus delivered similar performance to a fully-fledged GTX 1080-based laptop. However, it lacked processing power, because GTX 1080-equipped laptops tend to use overclockable CPUs, and it suffered from thermal throttling in particularly demanding titles.

Finally, we’ve included the recently reviewed Acer Predator Helios 300, which we awarded with an Editor’s Choice for its excellent performance and low price. The GTX 1060-based Helios features an i7-7700HQ, 16GB of DDR4-2133 memory, and a 256GB M.2 SSD as its only storage source. It features a 15.6” FHD display. The Helios doesn’t have any extraneous features, which is part of its charm; it’s gaming value in its purest form.

3DMark’s game-like workloads give us a sneak peak of our roundup’s gaming results.

The Eurocom Q5 slightly underperforms the MSI GE63VR Raider, which is to be expected. We see the Q5 fall behind the Raider across the board, but it doesn’t dip as low as the Acer Predator Helios 300. The charts create an almost perfect staircase effect, with the Max-Q GTX 1070 falling cleanly between the GTX 1060 and GTX 1070, and the Max-Q GTX 1080 between the GTX 1080 and GTX 1070.

Cinebench measures CPU prowess, particularly the benchmark's single and multi-core tests. On the other hand, the OpenGL shading test is platform-based, with a slight preference for GPU strength.

Starting off with CPU-based benchmarks, the Q5 matches the Raider, Zephyrus, Helios, and even X7 in single core performance. However, the X7 takes the lead in multi-core performance thanks to its more robust i7-7820HK CPU. Things get interesting with OpenGL performance. The Q5 doesn’t perform as well as the Raider, as expected. But we also see the Zephyrus fall behind the Raider, despite the former’s GTX 1080.

CompuBench features a handful of benchmarks. We use the platform-based Video Processing test and GPU-based Bitcoin Mining test.

We witness a perfect staircase effect yet again, this time in both workloads. The Q5’s less powerful Max-Q GTX 1070 provides a two-point reduction compared to the Raider. It takes a more considerable hit in the Bitcoin Mining score (a 19% reduction).

We perform an IOmeter test on each laptop’s primary drive to measure basic random and sequential read and write speeds. Most of the laptops in this roundup contain Samsung SSDs: the Q5 has a 512GB 960 Pro, the Raider has a 512GB PM871, and the X7 and Zephyrus both have 512GB SM951s. The outlier is the Helios, which contains a 256GB Micron 1100.

The Q5’s 960 Pro SSD dominates across the board. In our 4K random (QD2) tests, it matches the SM951s in read speeds, but far exceeds them in write speeds. We see similar results in 128K sequential read and write speeds. The Q5 will load application-based tasks and large files with unprecedented speed.

To approximate a system’s common workday performance, we use PCMark 8’s Microsoft Office and Adobe Creative tests. The tasks are platform-based, so systems with powerful CPUs will perform the best.

The Eurocom Q5 lands in fourth place yet again, but the margins between the Q5, Raider, and Helios are rather insignificant; you shouldn’t experience a noticeable performance difference in real world usage. However, the GTX 1080-based laptops perform significantly better, with the Aorus X7 DT v7 in particular outscoring the Q5’s Microsoft Office score by several hundred points, thanks to its i7-7820HK CPU.