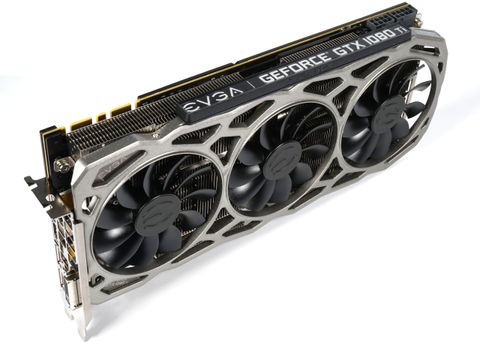 Around back, the board is unremarkable. Notice those dark spots where the thermal pads were glued on between the PCB and backplate.

That two-part plate doesn't have any foil attached to the inside and it isn't there just for looks; the backplate helps cool the board passively. In addition, it adds rigidity to the sandwich structure, along with the other side's cooling plate between the PCB and main heat sink.

As mentioned, the main heat sink doesn't incorporate cooling for the voltage regulation circuitry. We also know that the power supply had to be spaced out due to its many control circuits. What we do find are a great many thermal pads.

Except for the GPU and its heat sink, everything else is cooled by the sandwich-style cooling plate. This includes the memory modules and the GPU/memory power supplies. We also get another good look at the heat pipe and VRM heat sink, which touches the on-board components through thermal pads, while its back is connected to the cooler. This pipe helps combat the formation of a hot-spot, and it has another thermal pad that makes contact with fins on the top side.

As an experiment, we eliminated the heat pipe (by removing its thermal pad) and measured a temperature increase of up to 3 Kelvin on the center MOSFETs.

Again, the cooler is a true dual-slot solution. This naturally means it's subject to some surface area constraints not as prevalent on 2.5-slot cards. Nevertheless, EVGA managed to implement a 300W design fully capable of coping with GP102's waste heat, even in a closed case, so long as its three fans are running.

Three 8mm and three 6mm heat pipes consisting of a nickel-plated composite material are dedicated to the task of dissipating heat through the fin assembly. A nickel-plated sink holds the pressed-in heat pipes, as well as the cooler structure. Wherever the VRM heat sink's thermal pads connect, the surfaces form a 90° angle to create an additional, larger contact area.

The card's three 85mm fans are equipped with 11 rotor blades each. Their rather steep angle suggests optimization for lots of airflow.