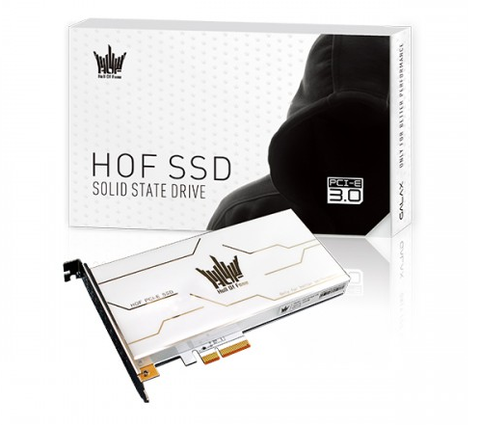 There are still very few 1TB NVMe SSDs shipping in retail form. We have the usual suspects in the charts, other than the Samsung 960 Pro. There isn't a product available that can produce the same level of performance, but Samsung has been slow to send out additional capacities to reviewers.

The Intel SSD 750 was the first NVMe SSD to market. The drive was costly at launch, and even though the price has come down, it's still more expensive than other 1TB drives. The OCZ RD400/RD400A and Plextor M8Pe also come equipped with MLC flash.

The Samsung 960 EVO and the entry-level Intel 600p are the only TLC-based 1TB NVMe SSDs available. More products are coming to market with IMFT 3D TLC, but the 384Gbit die does not produce the same user experience as Samsung's superior TLC NAND.

The Galax HOF PCI-E joins the Tigo G5 add-in card and competes for premium NVMe SSDs sales in the APAC region. It's a premium face-off between these two unique products.

We hope to see more Phison PS5007-E7 1TB drives in the near future. The HOF PCI-E caught us off guard even though Galax teased it on a few occasions. Galax has teased various SSDs in press releases and at trade shows for a few years, but most of those haven't come to market. None of the Phison partners that dominate the US market (like Corsair, Patriot, and MyDigitalSSD) have announced a 1TB E7. We hope that changes soon. Until then, the Galax HOF PCI-E gives us a sense of what those eventual products may look like.

Galax's pricing leads us to believe the Phison PS5004-E7 is a fire breather, but our testing shows the controller matches mid-tier NVMe SSDs. The Zotac SONIX, the first E7 to come to market, is the only E7 we've tested with a heat sink. The SONIX uses older firmware than the newer M.2 designs.

Phison and its partners could build 1TB E7 M.2 SSDs, but it requires expensive NAND with 16 die stacked inside each package. The high-density packages are the most popular for SSD and smartphone manufacturers. Western Digital recently released the Black PCIe with 16-die stacks, but the M.2 2280 drive only uses two packages to create a single-sided model.

Galax lists sequential write performance at 1,300 MB/s. We blew past that mark with 1,500 MB/s at QD4. QD 1 and QD2 sequential write throughput is a steady 1,300 MB/s. With Toshiba 15nm MLC flash, you don't have to worry about filling the SLC buffer and the resulting performance drop off. The drive can sustain high sequential write speeds over 1,000 MB/s if there is clean flash available for incoming write data. Phison's firmware improvements over the last year have optimized background data management to give this eight-core flash processor more teeth.

We were optimistic that the Galax HOF PCI-E would break 10,000 random read IOPS at QD1, but the drive didn't hit our target. The drive still achieved over 9,000 IOPS at QD1 and scaled well to QD8. The drive peaks at 117,000 IOPS at QD2, but performance doesn't increase much after that. There is a rapid decline in scaling between QD 16 and 32. We believe the sub-optimal scaling stems from the heatsink and thermal throttling. We can push more IOPS at high queue depths if we inject more idle time, which allows the SSD to cool between tests.

We observed the same behavior during the random write test. The drive reaches 115,000 IOPS at QD4 and refuses to scale beyond that mark. However, we can punch past 170,000 IOPS after we give the drive time to cool off.

The shroud that covers the heat sink is trapping heat. There just isn't a large enough opening at the back of the card for air to flow through. We ran some fun experiments with the case cover both on and off to see the effect of positive case pressure. You may run into issues if you run your computer with the side panel removed because it reduces the airflow over the heat sink.

None of that played a role in the low queue depth portion of the random write test. The Galax HOF PCI-E 1TB is similar to the 512GB-class E7 products we've tested. There doesn't seem to be a notable performance increase from the extra NAND packages.

The Galax HOF PCI-E joins the Samsung 960 EVO 1TB at the bottom of the mixed sequential chart. The performance we see here isn't bad, even if it is at the bottom of the chart. NVMe SSDs are very good with mixed workloads due to their reduced latency. The Intel SSD 750, OCZ RD400, and Plextor M8Pe just happen to be better than the Galax and Samsung models.

Most of the NVMe drives start out with the same level of performance during the mixed random test. The OCZ RD400 and Plextor M8Pe take a slight lead at QD4. We focus on the QD4 to QD8 range even though most random writes at that point are very small bursts for log files.

We begin the sequential steady state test with a 10-hour preconditioning phase. Then, we start a write workload and steadily increase the percentage of read requests. Thermal throttling is the only logical reason why the E7-based HOF PCI-E would land at the bottom of the performance scale during the 50% read workload.

Given the size and cost of the Galax HOF PCI-E, we don't suspect many users will run these NVMe SSDs in RAID. The drive delivers higher 4KB random write IOPS in steady-state compared to the Tigo G5. It also delivers more consistent performance than the G5, which uses an SLC buffer to increase performance even though it is an MLC drive.

All of the 1TB NVMe SSDs perform well with real applications. The Galax HOF PCI-E 1TB falls to the lower end of the charts, but many of the results are very similar between this elite group of products.

The HOF PCI-E delivers a 435 MB/s average when we average the results into a single throughput score. The drive is faster than the Tigo G5 by a small margin, but roughly 100 MB/s slower than the Samsung 960 EVO.

The HOF PCI-E is around 130 MB/s slower than the MyDigitalSSD BPX in this test, and this is the point in our test cycle that we began to suspect the cooling solution is holding the Galax NVMe SSD back.

The PCMark 8 Extended test backs up our thermal throttling theory. The Galax HOF PCI-E scored higher in the Degrade 2 portion of the test than it did during the first degrade cycle. The performance also falls for many of the following tests. By the third degrade cycle, the drives should all be in steady state and performance should be fairly consistent. When thermal throttling kicks in, all bets are off. Performance increases and decreases in cycles as the throttle algorithm transitions between high- and low-performance modes.

The service time portion of the test shows the throttling with more clarity. This is where your computer case makes a real difference in performance. If your case has a lot of open space, like with a mesh top with an array of fans that exhaust air, then your computer case doesn't have a lot of positive air pressure (if any). If you don't have a fan on the Galax HOF PCI-E, the restrictive heat sink cover serves as an aesthetically pleasing but airflow-restricting component.

The Disk Busy Time test again shows us that during heavy loads the drive will throttle more than a Phison PS5007-E7 without a heat sink installed at all. The shroud becomes insulation rather than aiding in reducing the controller temperature. I would consider this a design flaw for anyone other than a casual user. Workstation-class workloads will likely suffer from thermal throttling conditions.