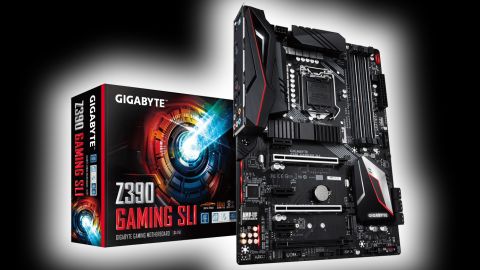 The Z390 Gaming SLI is the only sub-$160 board we’ve tested that fully supports our Core i9-9900K, even at stock speed. If that’s your CPU of choice, that should mean more than the added features of its far-weaker competitors.

Intel’s Z-series chipset offers high-end support to the company’s mainstream socket, including such enthusiast-class features as CPU overclocking, high-data-rate memory, and CPU PCIe Bifurcation (ie, sharing the CPU’s sixteen PCIe 3.0 lanes across two or three PCIe slots). Given that, it’s not a stretch that potential buyers would assume that all Z390 boards would be able to handle all the CPUs on the current mainstream platform, up to and including the Intel Core i9-9900K that we use for testing.

That said, we’ve found through testing that’s not always the case, especially with sub-$200 budget-focused models. But Gigabyte’s sub $160 (and sub £150) Z390 Gaming SLI proves the exception. It’s missing a few bells and whistles, but handles Intel’s “mainstream” i9 better than anything we’ve tested in this price range.

Generally, fewer features mean less manufacturing costs and design complexity, to the point that it’s typical for value-focused shoppers to point to high-end boards and mention that, more often than not, several features are unnecessary for most users, and / or can’t be used at the same time as other features. Priced under $160 (and under £150), the Z390 Gaming SLI’s spec sheet boasts just one shared pathway: the SATA interface for one of its M.2 slots. And that minor problem goes away if the user instead chooses an NVMe drive rather than a SATA model.

The RGB push hasn’t missed this lower-cost board, though lighting is limited to just the lettering on the Z390 heatsink cover, a small stripe on the I/O connector top cover, and the translucent stripes along the pathway between the audio codec and I/O panel jacks. Since Gigabyte hadn’t created a photo to illustrate these effects, I tried my hand at editing them into our original photo.

Moving on to more substantive matters, we find six USB 3.0 and two USB 3.1 Gen 2 ports on the I/O panel, along with a legacy PS/2 port, HDMI output for CPU graphics, an RJ-45 connector for Intel’s i219 Gigabit Ethernet hardware, and six analog audio jacks for the ALC1220 codec that supports 7.1-channel surround sound.

I’m always a little disconcerted when I don’t find a pair of USB 2.0 ports for my keyboard and mouse, since those would be free of any HSIO (Intel’s flexible high-speed interface) restrictions, but we do understand that simply adding the connector also adds cost. Likewise, penny pinching probably also explains the lack of a Type-C connector for either of the two USB 3.0 Gen 2 ports.

Getting down to the nitty gritty, the big voltage regulator is the biggest difference between the Z390 Gaming SLI and the other sub-$160 Z390 boards we’ve tried. We’re looking at 12 phase groups, and at this point we really don’t care how they’re split or combined if they have adequate amperage to support the Core i9-9900K, since that’s where competing boards fell short in our tests. That regulator also has two large heatsinks and a combination of four-pin (ATX12V) and eight-pin (EPS12V) power inputs.

Two metal-reinforced slots share pathways via four two-lane switches to enable x16/x0 or x8/x8 modes, which automatic switching to the latter setting when a card is installed in the second slot. The third x16-length slot has only two pathways from the bandwidth-choked Z390 platform controller hub (PCH). Locking these allowed Gigabyte to keep both PCIe x1 slots permanently enabled without any sharing. The PCIe x4 pathway sets for M.2 slots are also permanently assigned.

All six SATA ports face forward, so that associated cables can slip under the leading edge of long expansion cards.

The Z390 Gaming SLI’s box includes nothing more than the baord, a manual, a driver / application disc, and four SATA cables. Long-time builders might be surprised not see a high-bandwidth SLI bridge, but Nvidia’s latest graphics cards don’t support those and the special NVLink bridges are too expensive to include even with high-end boards. Older cards and bridges are still compatible with this board, and adding the SLI moniker assures builders at a glance that the second x16-length slot at least gets eight of the CPU’s sixteen direct pathways, when enabled.