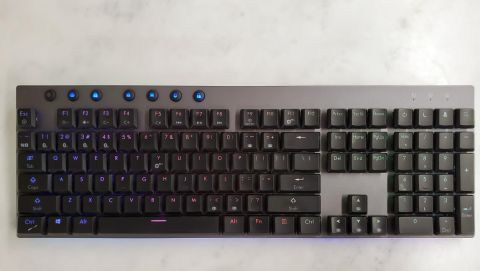 With clicky Kailh Choc white keys and a familiar layout, Hexgears’ low-profile Venture keyboard delivers a pleasing experience whether tethered or over Bluetooth. But media keys and RGB software are frustratingly absent.

If I had to pick two clear trends in mechanical keyboards in 2019, they’d be low-profile switches and a move from wired to wireless (Bluetooth) connectivity. Hexgears’ latest clacker, the Venture ($129 via Kickstarter, with an estimated ship date of 10/2019), delivers both of those features, along with a generous slathering of RGB lighting--including a ring that runs all the way around the keyboard’s aluminum base plate.

With pleasingly tactile and clicky Kailh Choc white switches in our review unit (brown and red will also be offered) and the ability to switch between up to four paired devices on the fly, the Venture is a solid-feeling, pleasing clacker for gaming or typing. But given the size (17 x 5.5 x 1-inches), we’d like to see dedicated media control keys. And with a full-size layout, including number keys, the keyboard isn’t all that travel-friendly.

In short, we’re not sure the keyboard’s low-profile switches provide anything in the way of added value or benefit. If you like the way they look and feel, that’s fine. But we’re not convinced that the trend toward slimmer low-profile keys is anything other than a fad, at least beyond reduced-size models that are meant to be easily tossed in a bag for typing on the go.

Aside from the RGB lighting, which includes a pulsing ring that runs around the bottom of the Venture’s aluminum base plate, there’s nothing particularly flashy or edgy about the Venture’s design.

But that’s not a bad thing. Our review unit came with a grey aluminum base plate (black is also an option), black low-profile keycaps, and seven round buttons up top for adjusting the lighting, locking the keys and powering on/pairing the keyboard to devices.

We’d like to see dedicated media keys on any full-sized keyboard, but Hexgears has at least integrated controls into the Function row. The keycaps are also fairly plain-looking, but that’s the one area that Hexgears plans to update in the final shipping product.

And that’s a very good thing considering that the paint on the left CTRL key started flaking off within a few days of testing, and other keys started getting unevenly shiny. Hopefully keycap durability improvements are high on the improvement list for Hexgear’s planned keycap changes.

Other aspects of the Venture’s design that are worth pointing out include the removable USB-C cable (plenty long at over five feet, and pleasingly braided) that’s used both for wired operation and for charging the keyboard’s battery for wireless Bluetooth typing. And a row of buttons above the number pad offer one-touch access to (for Windows users at least) powering down your system, sending it to sleep, signing out of Windows, or searching via the browser bar.

Also interesting: The battery (or batteries) in the Venture are a pair of removable NiMH AAs. So if for some reason you find yourself with a dead keyboard and an inability to charge it over USB (maybe you left your USB-C cable at home), you can just pop in a pair of standard AA batteries and get back to typing or gaming. The company says you should get up to four weeks of use on a charge (assuming 2-3 hours a day) with the lighting off, or about 16 hours with the RGBs flashing. I didn’t use the keyboard long enough unplugged to test those claims.

Unlike reduced-sized mechanicals that require a period of adjustment (we’re looking at you, Cooler Master SK621), the 108-key layout of Hexgears’ Venture feels instantly comfortable and familiar if you’re coming from another full-sized mechanical keyboard. Switching from a Corsair Strafe RGB MK.2 keyboard as my daily driver, none of the Venture’s keys felt out of place or caused me to make extra typos.

In fact, the Kailh Choc white switches in the Venture, with their tactile bump and clicky sound, felt more satisfying and pleasing when typing than the linear Cherry MX Red switches in the Corsair keyboard that normally sits in front of my monitor.

The only drawback of the switches that I can determine is that they don’t use a standard keycap mounting mechanism. So you won’t easily be able to find replacement keycaps should you want to change things up or if some of your keycaps get damaged. Again, this is why it’s very important that Hexgears fixes the issue that we had with the paint chipping off the CTRL key.

Hexgears says it will include a subset of four Mac-specific keycaps for Apple users, along with a Mac-specific firmware that swaps the modifier keys, but neither were available to test in our review unit. And the company says a carrying case will be included if the keyboard hits a $200,000 stretch goal.

When it came to gaming, since I also use a full-sized mechanical keyboard at home, the Venture felt immediately familiar to my fingers. I put it through a few rounds of 2016’s Doom and the steampunk zombie strategy game They Are Billions, and found myself enjoying the Choc white switches more than the Cherry MX Reds that I typically game with. Whether or not the shorter low-profile travel and tactile bump actually made me a better gamer is a whole other matter. I don’t think my skills are nearly l337 enough that such things actually make a substantive difference in my frag rate, but the Venture was certainly an enjoyable companion for gaming.

The only thing I felt was missing (and this is minor, at least for me), was software that would let me sync the keyboard’s lighting with other RGB devices or load presets for specific games. If that’s your aim, you’re better off with a keyboard from bigger brands like Logitech or Corsair.

The only thing I miss about the Venture’s layout is the lack of dedicated media keys. There are a bank of round buttons above the first half of the Function row, but they’re used to pair the keyboard, power it off and on, lock various keys, and control the RGB lighting--which brings us to the next section.

As stated earlier, the Venture has per-key RGB backlighting on the keys, as well as a light bar that runs around the bottom of the keyboard for some added desk glow. But while the lighting is reasonably bright and looks good, there is no software to control the RGBs.

Instead, Hexgears employs a mix of physical buttons above the Function row (one for adjusting the lighting modes of the keys and one for adjusting the mode of the light bar) and key combos (Fn+Left/Right Arrow adjusts the speed at which the colors change) to let you tweak the keyboard’s visuals. There’s even a “Light Recording” feature that lets you choose the color of each individual key.

The absence of software means you don’t have anything to install and your lighting effects will come with you when you use the keyboard on various devices. But tweaking lighting and cycling through effects is of course easier done via software, and the absence of it here means Hexgears had to dedicate keys to lighting controls that could have been used for media controls.

If you find yourself adjusting your keyboard lighting more often than you play/pause/skip audio and video files, that’s a decent tradeoff. But as much as I enjoy tweaking lighting effects, I use the media keys on my keyboards at home and in the office dozens of times a day.

One of the Venture’s key features is the ability to pair with up to four Bluetooth devices at once, so you can jump between, say, using the keyboard with your desktop, phone, and a laptop on the fly. I paired the keyboard with my custom desktop, my Samsung S10 Plus, and my standard-issue Dell work laptop. Once that was done, typing between the three was as easy as hitting Fn+1, 2, 3, or 4, where each number is tied to a specific device.

The feature worked well, but it isn’t exactly new. I’ve seen similar settings on various Logitech peripherals. But it’s nice to see muliti-device considerations built into more peripherals.The idea of using a keyboard with a single device is starting to become quaint--especially if the keyboard is also designed for travel. That said, just like with the media controls, I’d rather have dedicated buttons to switch between devices, rather than having to rely on keyboard combos.

For typists and gamers on the go (even if the couch is as far as you plan to go), Hexgears’ Venture offers a solid, pleasing keyboard experience. Multi-device Bluetooth connectivity and low-profile switches also make it more versatile for those who want to bring the mechanical experience to multiple devices. But at 17-inches long and a third of that wide and weighing over 1.5 pounds, it’s not exactly the kind of keyboard you can conveniently carry everywhere.

And as much as I found the Kailh Choc white switches and familiar 108-key layout familiar and a joy to type and game on, I frequently found myself reaching for dedicated media keys that weren’t there. Having to look down to find a key combo to pause a track or adjust the volume is arguably less-convenient than just reaching over to my mouse and doing the same via software.

And while those who treat their backlighting as more of a set-it-and-forget-it feature might not miss intuitive software-based lighting controls, gamers and those who like to try out every effect--and change them up on the regular--probably will.

In short, if you value slim switches and a familiar, roomy layout over media controls and easy lighting controls, Hexgears’ Venture is well worth considering. But remember also that this keyboard is still in the Kickstarter phase. While Hexgears has delivered impressive keyboards before, including the excellent Impulse, there’s no guarantee with any Kickstarter that a product you put down money for will arrive on time--or at all.