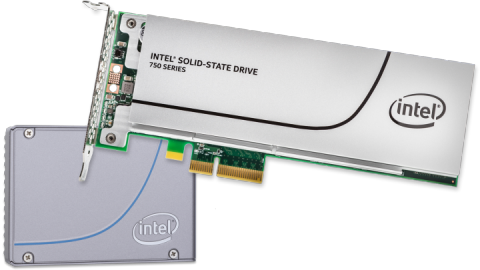 Using any of the SSD 750s on a desktop running one app at a time is like using a bulldozer to carry the family groceries. While certainly possible, it's not at all economical. Gamers and power users lust over the SSD 750 for its performance, but this is a workstation-class drive that some enthusiasts might consider affordable. Really though, you need a heavy workload to get the most out of Intel's 800GB SSD 750.

When you hit them with the right workload, Intel's SSD 750s can move a lot of data quickly. But their biggest problem comes from Samsung's 950 Pro and OEM SM951-NVMe. Looking back at the charts, we constantly see the 512GB 950 Pro beating Intel's SSD 750 in everything except random writes at low queue depths. If you are just looking for a boot drive, the SSD 750 isn't your best choice. Really, you need to be hitting it with advanced workloads (think heavy multitasking and lots of data writes) to get the most from it.

Intel wants us to know that throughput isn't everything. Access times and latency yield a much better way of evaluating the user experience. Instead of shooting for record-breaking performance numbers that most enthusiasts will never see, Intel focused R&D on delivering consistency.

The Disk Busy Time test shows how long the drive actually works to complete each task. Our results tell us that Intel's SSD 750s are much more efficient in the trace-based benchmarks. All three SSD 750s generate similar results in real-world applications, so as a desktop enthusiast, try not to worry about the 800GB model's specs technically coming in under the 400GB and 1.2TB versions.