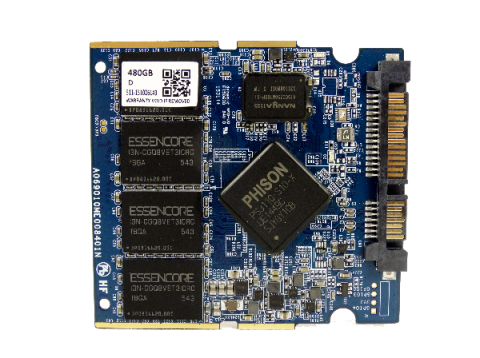 The Phison S10 can be programmed to support an emulated SLC buffer, but we only see that feature used with TLC NAND flash, which requires the extra kick to increase performance. MLC flash doesn't need an SLC buffer because the flash already sustains quick writes throughout the entire LBA range.

Unlike the old SandForce controllers that slow down when they write incompressible information, the S10 takes a hit when it reads small blocks of data.

Zotac's Premium Edition SSD uses the same Phison S10 controller as the Klevv Urbane. In that review, our charts included other low-cost SSDs. But because the Klevv Urbane uses premium Toshiba flash, we wanted to see how Phison's new firmware and the faster NAND compared to higher-performing SATA-based drives.

The tests on this page employ incompressible data, but that doesn't the Urbane drives much. After all, its S10 controller is one of the fastest at reading large-block data.

Although all three capacities were tested, only the 480GB model is directly comparable to the other products. With that said, even the 240GB Urbane performs well compared to the higher-capacity drives on our charts.

The two largest Urbanes top the sequential write test, partly due to the version 1.6 firmware improving performance. This is important to note  because many enthusiasts looked at and dismissed Phison S10-based products in the past. Now, they're more viable.

As a result of less interleaving than the higher-capacity models, Klevv's 240GB Urbane falls to the bottom of our sequential write chart. This is normal for lower-capacity SSDs. Klevv claims the 240GB drive can do 390 MB/s, but we managed to pull a little more performance from the drive.

I'm genuinely surprised that Klevv's Urbane could not deliver 10,000 or more random read IOPS at a queue depth of one. The 10,000 IOPS mark separates mainstream SSDs from high-performance ones in our evaluations. The low-cost Zotac Premium Edition drives we tested last month crossed that barrier, but Klevv's Urbane does not. It still performs well though, scaling up through a queue depth of 32 (the highest you can go across the SATA interface).

Although it achieves solid 4KB random writes, the Urbane doesn't fare as well in this group of high-performance drives. The line chart is telling, even if these products cluster up, managing nearly identical performance.

Several of the drives in today's charts, even the high-performance models, struggle with mixed data workloads.

SATA is half-duplex, meaning it can only read or write at one time. Command queuing was introduced to reshuffle the operations, thereby improving performance. And this worked well enough in the world of mechanical storage. But it quickly became a real-world bottleneck with flash.

Small blocks of random data aren't as forgiving, and the Urbanes fall to the bottom of the field. In fact, they come up about 10,000 IOPS short of Zotac's Premium Edition drives at a queue depth of 32. Both SSDs were tested with the same 1.6 firmware, yet they still differ in some other way.

Klevv's high sequential performance carries over to the steady state test. This workload doesn't mimic what most of you do, but it means a great deal to professionals manipulating large video files. The 480GB Urbane performs well against products of similar capacity in the 80 percent read (client) and 70 percent read (workstation) blends. To keep your system performing at high speeds, you should run these workloads on a secondary drive rather than your primary operating system SSD.

This chart gets difficult to read with so many products, but it's easy to see where the best steady state read performance comes from (that's the purple line, Intel's 480GB SSD 730) and how Klevv's Urbane stacks up against it.

The Urbane drives do attain high peak performance, but are plagued by very low dips as well. Their steady state random write performance is inconsistent, so you won't want to run these SSDs in RAID 0 arrays where the swings get much wider and the performance becomes less predictable.

Prev Page Specifications, Pricing, Warranty And Accessories Next Page Real-World Software Performance
7 Comments Comment from the forums
Be In the Know