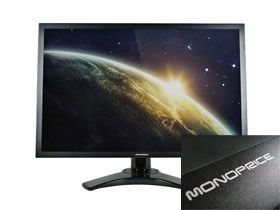 Pros: Low price, all-metal chassis, decent image quality with proper adjustment, Adobe RGB gamut Cons: Poor out-of-box accuracy, no sRGB gamut preset, middling contrast Verdict: A 30-inch 16:10 monitor is a rare bird these days, and as such, another brand will cost you at least $1000. If you need a wide-gamut screen, the Monoprice 30-inch IPS LED is one of the cheapest regardless of size. With a little tweaking, it delivers a good image and correspondingly good value.

No matter what monitors we review, a great many of your comments focus on price. We try to test high-end models in an effort to report on the latest advances in display technologies, and so the more budget-friendly products sometimes receive less coverage.

If you look beyond the offerings from major manufacturers, however, there are some good deals to be found online. Unfortunately, it’s much more difficult for us to get our hands on those screens because they often come and go before we have a chance to test them. In 2013, we managed to get an Auria EQ267W in the lab and found it be good-performing monitor at an unbeatable price. If you’re in the market for a 27-inch QHD/IPS screen, they are still available. And of course, gamers will want to check out Overlord’s Tempest X270OC, another 27-inch IPS that runs at up to 120Hz.

Today we’re checking out a unique offering from Monoprice, the 30-inch IPS LED. Yes, that’s really its name. There's no alphabet soup to mess with. And here’s the best part: it sports a 16:10 aspect ratio. We’ve long lamented how rare this screen size has become, and we’re glad to see you can buy one in a jumbo size for such a low price.

Known merely as “Product 10734” the 30-inch IPS LED is listed (as I write this) for $689.33 at Monoprice.com. Considering the competition is both low in quantity and higher in price, it’s a steal for a monitor this big (especially one with a 16:10 aspect ratio).

Looking at our most recent reviews, the only other screen in its class is the BenQ BL3200PT, a 32-inch VA-based panel with 2560x1440 resolution and super-high contrast. But that one sports a 16:9 aspect ratio and offers only the sRGB color gamut. To find a closer match to the Monoprice, we had to go all the way back to June 2013 when we reviewed 30-inch 16:10 panels from HP and DoubleSight. The HP has since been replaced by a newer model, while you can still buy a DS-309W for around $1100.

You probably won't want to, though. The Monoprice one-ups both competitors with the addition of a GB-r-LED backlight. The HP and DoubleSight use CCFL. Not only is the LED more energy-efficient, but it enables the wider Adobe RGB gamut. This is not something Monoprice mentions in its description; we discovered it during testing.

So we have a solidly-built 30-inch 16:10 jumbo screen at a low price. But does it perform well? We found a few quirks during our evaluation, but with careful adjustment (which we’ll show you how to do expense-free), you can get a decent image and save about $400 over the DoubleSight. Let’s take a look.

Next Page Packaging, Physical Layout, And Accessories
20 Comments Comment from the forums
Be In the Know