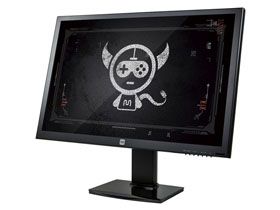 Viewing angle performance is the primary reason gamers are clamoring for more IPS options. The technology is certainly better than TN in this regard, but it isn’t perfect. The G-Pro shows a green shift at 45 degrees with a visible light falloff. Shadow detail holds up extremely well, however. In the top-down photo, there is a reduction in gamma, though you can still clearly see all the brightness steps. When a display is this large, IPS or VA is pretty much mandatory.

A 13.68-percent result suggests there is a little light bleed in our specific sample. The only hot spot we can actually see is in the lower-right corner. That zone is .05cd/m2 brighter than the rest of the screen, which is otherwise uniform.

The white field result is comfortably below 10 percent, which is our standard. There are no visible problems anywhere on the screen. You can see that the two TN-based monitors, while decent, aren’t quite up to the uniformity level demonstrated by the IPS displays.

We reviewed the DS-309W quite a while ago and weren’t collecting color uniformity data back then, which is why its result is blank. The G-Pro shows a little color shifting on the right side of the screen. While the rest of the zones look perfectly white, the three on the right show a subtle green tint. We’re nitpicking for sure; you won’t see a problem in real-world content.

While the G-Pro 120Hz doesn't quite post the speedy response of a TN panel, or even Overlord’s IPS model, it’s still faster than the majority of 60Hz IPS screens. It is, however, also a little too slow to support the smoother motion one normally sees at 120Hz.

Here are the lag results:

The main draw of this monitor, besides its large IPS panel, is low input lag. It’s not quite as snappy as Overlord’s X270OC but only trails by a small amount. While you won’t experience super-smooth motion or minimal blur, response to user input is nearly as fast as the TN gaming displays we’ve tested.

After setting up the G-Pro to run at 120Hz, we noticed that the movement of on-screen objects didn’t seem much more fluid. Usually it’s easy to see the difference between 60 and 120Hz. Here, we weren’t experiencing it. Thankfully Blurbusters.com has plenty of tests for evaluating blur reduction, overclocking and frame skipping. We theorized that the latter was our culprit.

The first test flashes squares in sequence on a grid. If every frame is rendered, a still picture will show several squares turned on consecutively. Here’s the 60Hz result:

Obviously the G-Pro runs just fine at 60Hz with no frame drops. Now check out what happens at 120Hz:

The alternating black and white squares indicate the G-Pro is dropping every other frame at 120Hz. We got the same results at 72, 85 and 100Hz as well. I spoke to a product manager at Monoprice and he confirmed our observations; it’s a problem they’re working on. It could be fixed by a future firmware update. But if you don't want to gamble, it might be better to wait for a next-generation product.

In short, you won’t see significantly smoother motion on a G-Pro running at 120Hz, but you will benefit from much lower input lag than a typical IPS monitor.

Prev Page Results: Color Gamut And Performance Next Page A Work In Progress
19 Comments Comment from the forums
Be In the Know