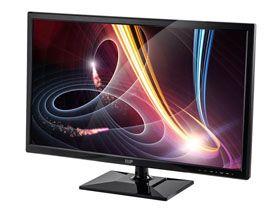 After a rash of introductions last year, there haven't been too many new 28-inch Ultra HD displays to talk about. For our comparison group we've chosen two business-class screens that impressed us: Samsung's UD590 and Planar's IX2850. We also have Monoprice's other example, the CrystalPro 4K. Acer is represented by its G-Sync gaming monitor, the XB280HK. And finally we have a 27-inch IPS model from ViewSonic, the VP2780-4K. Monoprice undercuts the other brands by at least $100 at this writing with the UHD Matte selling for the least of all.

Monoprice claims output of 300cd/m2 for the UHD Matte but we could only manage 246.3954 from our sample. This isn't a deal-breaker unless you need to use the monitor outdoors in bright sunlight. If you're wondering about the effects of Uniformity Compensation, we'll cover that in the calibrated output tests.

With the lowest output it stands to reason that the UHD Matte's black level would also be among the best. Unfortunately, this doesn't mean it has the highest contrast of the group but we found blacks to be visually on par with the competition.

The UHD Matte lags a bit behind its stablemate in the maximum contrast test. The IPS-based ViewSonic easily outpaces this field of TN panels so that's at least one reason to consider it over the lower-priced displays.

Our preferred minimum backlight level is 50cd/m2 and the UHD Matte stops a little higher than that. 82.1488cd/m2 is a good setting for dark rooms however. If you experience eye fatigue at the zero brightness setting, a small lamp at your desk will close your pupils a little and balance things out.

The Samsung and Acer screens post impressive minimum black level numbers but their backlights are far too dim to be of practical use. Ultimately though, the Monoprice is still a bit lacking in contrast regardless of the output setting.

The UHD Matte's minimum contrast is almost exactly the same as its maximum, which is a level of consistency we like to see. Of course more contrast would be better but at least image quality doesn't vary at different brightness points.

To show you the effects of the UHD Matte's Uniformity Compensation, we've included brightness and contrast results with the feature both on and off.

When the backlight is set for 200cd/m2 operation, the Uniformity Compensation reduces that output by only 15 percent. Many displays with this feature show a greater difference. So far, this is a good thing and the option is pretty much unheard of on a monitor in this price category.

Uni-comp has no effect on black levels whatsoever. The main question however is, does it improve panel uniformity? You'll find out on page seven.

The UHD Matte is a rare display in that its contrast actually improves noticeably after calibration. This is thanks to the fine resolution of the RGB sliders and the fact that they can be raised or lowered. The monitor is good without adjustment but we think a 7 percent increase is worth the effort. And it's one you can see in real-world content. Uniformity Compensation obviously lowers the number thanks to its reduction of the peak output level.

ANSI contrast stays fairly close to the sequential number thanks to decent panel uniformity. Turning UC on drops the result by roughly the same amount. While this last-place finish may give one pause, it's important to remember that the UHD Matte undercuts the competition by around $150.