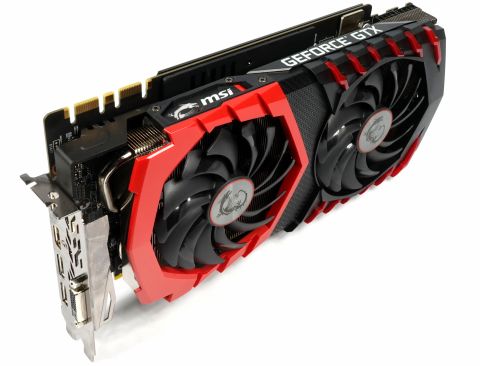 By default, this card's power target is limited to ~290W. That ceiling is almost reached during gaming workloads, and it's hit squarely when we apply a stress test.

Watching the voltage as this card heats up helps explain its behavior. The 1.0625V we measured at the beginning quickly falls to a peak of 1.05V during our gaming loop, but it can also drop even lower when there's a spike in utilization. The same phenomenon occurs during our stress test, though the values dip even further.

Let's break the power consumption measurement into separate, higher-resolution lines for each supply rail over a two-minute interval. In spite of our intelligent low-pass filter, occasional spikes remain visible. In places, they reach up to 360W.

Faced with a more consistent load, power consumption does rise a little. However, the peaks are almost completely eliminated. Instead, we see where GPU Boost kicks in to start limiting power use.

Increasing the power target to its ~330W maximum setting makes the readings more frenetic again. And in addition to the spikes, many dips become visible as well. These are attributable to the limiting control of GPU Boost.

Our current measurements don't reveal any abnormalities in the distribution of load on the supply rails.

Load on the Motherboard Slot

Ever since the launch of AMD's Radeon RX 480, we've been asked to include this metric in our reviews. But MSI's GeForce GTX 1080 Ti Gaming X 11G gives us no reason to be concerned about load on the motherboard's 16-lane PCIe 3.0 slot. In fact, the slot is hardly used at all. Given the power target's adjustable ceiling, we're glad to see MSI leaning hardest on the auxiliary power connectors. This also simplifies the board layout a bit.

Prev Page Gaming Performance Next Page Clock Rates, Cooling, And Noise
23 Comments Comment from the forums
Be In the Know