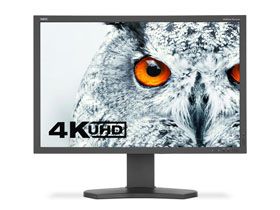 The PA322UHD is massively over-built, and it comes in a carton to match. The packaging looks big enough to hold two monitors, in fact. Lots of foam protects the display, which arrives fully assembled. All you have to do is lift it out. Then again, that's easier said than done considering it weighs 45 pounds!

Included in the box are power cords for several different countries, two DisplayPort cables and a USB 3.0 connector. You also get a setup manual and a CD with a complete user’s guide.

From the front, this looks like one of NEC’s typical industrial-styled screens. The bezel and stand are made from hard plastic with a matte finish that won’t pick up reflections. The stand is quite sturdy; it holds the heavy panel in position firmly, yet is easy to adjust. The anti-glare layer doesn’t impart any grain or texture to the image. It also rejects light well, making the monitor easy to install in most indoor environments. The stand has a full range of tilt, swivel and height adjustments. Additionally, you can rotate the panel to portrait mode.

Though we’ve become fans of joystick and S Switch controllers, NEC uses some of the best bezel buttons in the business. When you operate them, small labels appear on the screen telling you their function. The keys click with a feel of quality and the OSD interface is intuitive. The power LED can be blue or green, and it offers adjustable brightness. To the left of the power toggle is a light sensor that can tailor screen brightness to your room’s light level.

This is something we’ve only seen on professional presentation monitors (certain Panasonic plasmas come to mind) – a swappable input board that fits in a cavity on the PA322UHD’s right side. By default, it comes with a DisplayPort input but you can also purchase two different SDI (serial-digital interface) modules for use with broadcast systems.

No effort is made to make this panel appear slim. To the contrary, it's nearly four inches thick (mainly due to the massive shielding around the panel’s internals). The extra metal also helps shed heat through generous ventilation, resulting in a cool-running monitor.

At the top you can see two small handles, which are much better than grabbing the monitor by its edges. At the bottom of the upright is a small switch that locks the panel into its lowest height. That way, when you lift it off a table, it doesn't suddenly extend on the stand. We love this kind of attention to detail. Unsnapping the upright reveals a 100mm VESA mount. If you use an aftermarket bracket, be sure it’s rated for the PA322UHD’s 45-pound weight.

I don't think we've ever seen this many inputs on a computer monitor. There are four HDMI inputs, two DVI ports and one DisplayPort connection on the bottom-facing panel. On the left are two upstream and two downstream USB 3.0 jacks. At the extreme right is a headphone output. On the side (not shown) is an additional USB downstream port and the aforementioned option input.

With so many inputs, toggling through them can be a pain. NEC kindly sets them up to auto-sense. When you press the input button on the bezel, only those with active signals appear in the list of choices.