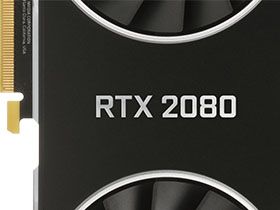 A dual-fan cooler gives Nvidia the freedom to deploy a conservative ramp. After a brief period of constant cooling during the warm-up phase, rotational speeds increase significantly as the GPU crests 68°C. We also see that the card really is sensitive to installation in a closed case, even though our clock rate numbers showed it maintaining aggressive frequencies, regardless of environment. Maintaining those rates simply means spinning the fans faster than the same card on an open test bench, particularly when TU104 hits its target temperature.

Even with the help of a big, heavy vapor chamber, there is no headroom to make the fans spin slower. They're already tuned well, straight from Nvidia. On the other hand, though, you can crank their rotational speed up for higher GPU Boost frequencies. But do you really want that?

The GeForce RTX 2080 Founders Edition remains unobtrusive across the entire frequency band; its fans are pleasantly quiet. There is a speed-dependent peak that shows up in a spectrum analysis. But while we have no problem measuring it, there’s really nothing to hear.

Background noise from the voltage regulation circuitry is also visible in our chart. Again, though, it’s almost lost in the sound floor. A measured output just under 40 dB(A) is commendable for a dual-slot card. Nvidia definitely succeeded in building a cooler that outperforms its previous-gen solution in every way.

Prev Page Nvidia’s Thermal Solution, In Depth Next Page Conclusion
91 Comments Comment from the forums
Be In the Know