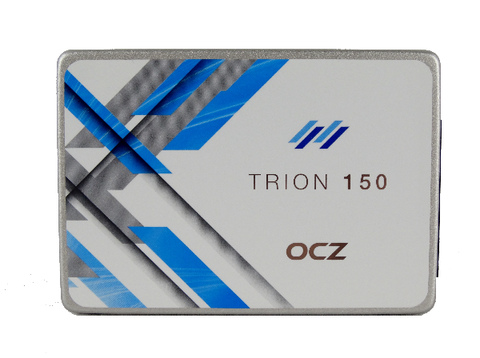 Mixing reads and writes during a performance test helps us better emulate real-world workloads. These drives rarely read or write data exclusively, especially if there's an operating system installed on them. At any given time you have multiple operations running in the background.

The 480GB Trion 150 seems slightly less consistent than the Trion 100. Its performance at a queue depth of two is also a little lower than its predecessor.

Many log file updates that happen in the background are random 4KB writes. In this workload, most of the drives perform similarly at a queue depth of two. Samsung's 500GB 850 EVO is the exception, nearly doubling the performance of its closest competition.

Thanks to its newly acquired direct-to-die write algorithm, OCZ's Trion 150 can outperform the competition under heavy reads in a steady state condition. Samsung's 850 EVO is still faster in the sequential write workload, but that's a benchmark mostly relevant to enterprises anyway.

The 80 percent (normal user) and 70 percent (workstation user) workloads favor the Trion 150 by a small margin. This shows that you'll continue getting good performance from the drive, even when it's full of data.

We ran into a strange condition under a full load of 4KB writes in steady state, where the Trion 150 dropped to zero IOPS, just like the Vector 180 we tested back in 2015. OCZ has a custom algorithm that flushes the buffer to flash. But it also causes a stall condition during the flush. This is a security measure that keeps user data safer, but can affect performance if you really tax your drive. Outside of a lab, you shouldn't see this behavior. We don't like to see write speeds drop to zero though, regardless of workload.