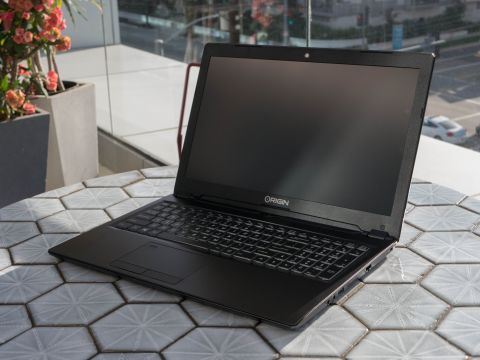 Our initial Max-Q reviews were limited in the sense that we had few competing models for comparison. With several Max-Q reviews under our belt, the Origin PC EVO 15-S will get some great competition. Our configuration includes an Intel Core i7-7700HQ, a GTX 1070 with Max-Q Design, 16GB of DDR4-2666 memory, a 512GB M.2 SSD, and a 2TB SSHD. It features a 15.6" Full HD (1920x1080) matte IPS display with a 120Hz refresh rate. The tech specs are fairly standard for a high-end gaming laptop. Let's hope the slim form factor won't impede the Max-Q GTX 1070's performance.

The EVO 15-S' direct competitor will be the Eurocom Q5, which also features a Max-Q GTX 1070. It contains a Core i7-7700HQ CPU, 16GB of DDR4-2400 memory, and a 512GB M.2 SSD. Its display is a Full HD (1920x1080) anti-glare TN panel with a 120Hz refresh rate. In strict gaming performance, we expect the EVO and Q5 to score evenly, but the former's IPS display is sure to produce better contrasts and color accuracy in our display benchmark suite. The decision will ultimately come down to price difference and display performance.

We will also be comparing the EVO to the MSI GE63VR Raider, which uses a traditional GTX 1070. It also features a Core i7-7700HQ and 32GB of DDR4-2400 memory. The Raider's storage is handled by a 512GB M.2 SSD, and a 1TB 7200 RPM HDD. It has a FHD 120Hz matte display with a 3ms response time. History tells us we can expect the EVO to achieve 85%-90% of the Raider's performance. With a larger chassis, the Raider should exhibit more efficient cooling.

Raising the bar, spec wise, gives us the Acer Predator Triton 700, which features a GTX 1080 with Max-Q Design. It has a Core i7-7700HQ, 32GB of DDR4-2400 memory, and a 512GB M.2 SSD. Besides GTX 1080-level performance, the Triton features outstanding build quality with refined gamer aesthetic, all within a relatively slim package. This will show what the next level GPU gives you for the money.

Finally, we’ve included the recently reviewed Acer Predator Helios 300, which we awarded with an Editor’s Choice for its excellent performance and low price. The GTX 1060-based Helios features an i7-7700HQ, 16GB of DDR4-2133 memory, and a 256GB M.2 SSD as its only storage source. It features a 15.6” FHD display. The Helios doesn’t have any extraneous features, which is part of its charm; it’s gaming value in its purest form.

3DMark’s game-like workloads give us a sneak peak at what we can expect for our roundup’s gaming results.

The Origin PC EVO 15-S performs about as well as the Eurocom Q5 and slightly less than the MSI GE63VR Raider, which has a full GTX 1070. Both of the GTX 1070 Max-Q laptops score between a GTX 1070 and GTX 1060 in terms of graphical performance, but CPU-based physics performance is nearly even across the board, because almost all of the tested laptops contain an Intel Core i7-7700HQ.

Cinebench measures CPU prowess, particularly the benchmark's single and multi-core tests. On the other hand, the OpenGL shading test is platform-based, with a slight preference for GPU strength. As previously foreshadowed in the 3DMark physics tests, the laptops all score well within reach of one another thanks to their i7-7700HQ CPUs. The only outlier is the Acer Predator Helios 300, whose less powerful GTX 1060 bottlenecks the CPU's maximum potential; even then, it only falls behind a powerful system like the EVO 15-S by about 2%. You can expect all of these laptops to perform similarly in CPU-intensive tasks.

CompuBench features a handful of benchmarks. We use the platform-based Video Processing test and GPU-based Bitcoin Mining test.

The Video Processing results show all GTX 1070-based laptops performing similarly, Max-Q or not. However, the Bitcoin Mining test is much more intensive, so Max-Q's power restrictions limit the EVO 15-S' overall performance. It scores about as well as the Q5 and about 18% lower than the MSI Raider.

We perform an IOmeter test on each laptop’s primary drive to measure basic random and sequential read and write speeds. Most of the laptops in this roundup contain Samsung SSDs: the EVO 15-S and Q5 both contain 512GB Samsung 960 Pros, the Raider has a 512GB Samsung PM871, the Triton 700 has two 256GB SK Hynix Canvas S300s running in RAID 0, and the Helios has a 256GB Micron 1100.

The EVO 15-S and Q5 provide outstanding 4K random (QD2) speeds thanks to those 960 Pros. The Triton's RAID configuration offers superior read speeds, but its write speeds are comparable to that of the Samsung PM871 and Micron 1100 . The same holds true in 128K sequential performance.

To approximate a system’s common workday performance, we use PCMark 8’s Microsoft Office and Adobe Creative tests. The tasks are platform-based, so systems with powerful CPUs will perform the best.

The Origin PC and Eurocom systems perform evenly yet again, offering similar Adobe Creative and Microsoft Office performance thanks to their comparable processors and GPUs. The only system that stands out is the Acer Predator Triton 700, whose GTX 1080 Max-Q pulls its PCMark scores ahead of the pack. It should be noted that PCMark's metrics offer a quantified score based on a system's configuration as opposed to real world performance. You shouldn't see a significant difference between any of these systems during actual Office or Creative use.