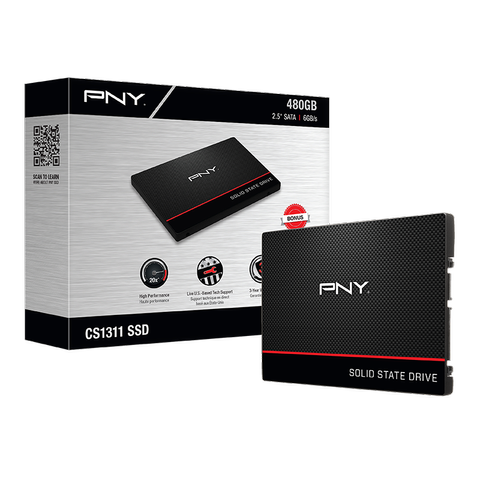 PNY's CS1311 SSDs fall into the entry-level category. We started isolating drives in this group several months ago and built charts with similar products for comparison.

Many of the contenders in this group use triple-level cell flash, including Samsung's 850 EVO, which stands out from the others with superior performance and the best overall value. Mushkin's Reactor SSD is the only model on the charts with multi-level cell flash. We often find it selling for value-oriented prices on Amazon and Newegg.

The Adata SP550, Crucial BX200 and OCZ Trion 150 also make the list. They typically fall to the bottom of the performance charts, but are priced aggressively.

Before we dive into our standard suite, there are a couple of pretests to look at. These will help to explain performance later in the review.

The first looks at native TLC sequential write speed. In HD Tune Pro 5.50, we write 128KB blocks of data sequentially to the drive's full LBA span. The resulting graph shows us performance from the emulated SLC buffer and then the native throughput of TLC memory. PNY's 480GB CS1311 hits 190 MB/s after the SLC cache is exhausted. That's fast enough keep up with file transfers over a GbE network, at least. The 240GB model drops to 170 MB/s, which is also fast enough to write across a network without slowing the transfer down. But both drives come close to the speed of today's fastest 3.5-inch, 7200 RPM hard drives. To be sure, the new direct-to-die write algorithm nearly doubles performance, delivering a large improvement over older S10-based SSDs with TLC flash.

The Anvil Storage Solutions tests provide a performance snapshot with compressible and incompressible data. At least in synthetic testing, the S10 controller can accelerate transfers of compressible information.

Phison-based SSDs have always delivered strong sequential read performance. This dates back to the PS3105-S5 processor released in 2012. The 480GB PNY CS2211 scored 542 MB/s in our test at a queue depth of two. That's even a little higher than the MLC-based 480GB CS2211 XLR8 we tested previously. The 240GB CS1311 trails many of the larger models, but still impressed us with a strong showing at low queue depths.

Both of the CS1311s we're testing post lower sequential write numbers than we were expecting. We looked at other tests run on Phison S10-based drives with TLC flash and couldn't find evidence of this same condition. PNY uses a custom firmware version number, so we are not sure what Phison software is running on the drive to compare against other SSDs with the same controller.

If we were to guess, we'd hypothesize that the emulated SLC buffer is flushing data at a much lower rate than the other S10-based drives with TLC in our charts. In between each of the queue depth tests, we insert a five-second pause called think time. This normally allows each drive to flush its buffer between runs, facilitating a little more variability in the results with SLC mode. You see the effect as wavy lines in the chart.

It also keeps the SSDs out of steady state so they deliver results more like what you see in the real world. PNY's CS1311s are the first SSDs we've tested that drop into sequential steady state with the think time in place. This could have a real impact on performance while multitasking in applications that write several large pieces of data in short succession.

The line chart shows the two PNY CS1311 SSDs more positively. But once we look at the raw results, we see that these products suffer from low random read performance at a queue depth of one.

Tht chart also shows us why SSD vendors have a hard time selling entry-level and mainstream SSDs. Samsung's 500GB 850 EVO (available for as little as $147) dominates in our random performance metric. Meanwhile, PNY's 480GB CS1311 sells for $140. But is a $7 savings really enough to overlook such a sizeable difference? We don't think so.

The CS1311's random write performance falls in the middle of the test group. Again, we see a wide gap between the 480GB CS1311 and 500GB 850 EVO that goes all the way down to low queue depths. By a queue depth of four, the 850 EVO doubles the CS1311 480GB's numbers. The PNY drives fail to clear their emulated SLC cache fast enough to accelerate moderate workloads.

Prev Page Specifications, Pricing, Warranty And Accessories Next Page Mixed Workload And Steady State
8 Comments Comment from the forums
Be In the Know