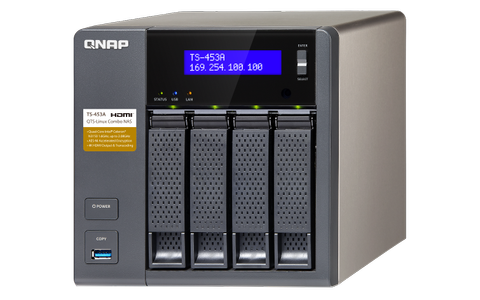 Each of the four corners come together in real-world application testing. The TS-453A is not the fastest NAS in our charts because we're including products from several different price points.

The SMB tests are representative of transfer performance across your network in Windows. All of the charted systems take advantage of SMB 3.0, except for Western Digital's My Cloud DL4100, which uses SMB 2.0.

QNAP's TS-453A performs well, delivering the results we expected given its price tag.

The TS-453A wasn't designed for large offices with many people accessing it at once. With SSD caching, the appliance would serve up greater throughput and achieve lower latency. After all, cache weighs heavily on the multi-client metric, as does CPU performance.

iSCSI is a different protocol than SMB, and NAS manufacturers use a different engine for addressing it. As a result, you can't assume that faring well in the previous benchmarks guarantees a strong performance here.

In our opinion, iSCSI goes underutilized in the home and small business environments. It's much more reliable than SMB in many cases, and creates a drive letter on your machine that makes the volume appear local (rather than mapped). iSCSI consequently makes it possible to install software to networked locations.

The TS-453A performs well in our iSCSI tests. It's nearly as fast as Asustor's AS7004T sporting a Core i3 processor. To its credit, QNAP has always provided a strong iSCSI engine.

We run the server workloads over iSCSI as if in a SAN environment. QNAP's TS-453A doesn't scale as well across more taxing loads as Asustor's AS7004T, but it enables more IOPS than other NAS appliances in the chart.