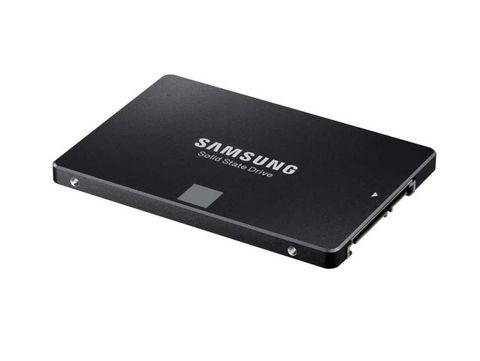 The 4TB 850 EVO fails to meet the same high marks as the 2TB EVO in the mixed sequential workload test. The 4TB still performs very well, and it even outperforms the 850 Pro 2TB.

In our experience, firmware tuning plays a larger role in mixed workload performance than the hardware running it. The new 850 EVO 4TB comes to market with a different firmware revision than the 2TB model. Most updates fix a stability issue or tune performance for 100% read or write workloads. Mixed workloads are often a tuning afterthought during firmware development, and those updates typically come after the reviews hit the web.

I started to wonder if it is even possible to get the Samsung 850 EVO 4TB into a true sequential steady-state condition after running this test. Even with the drive full, it still has access to another 96GB of the spare area for background activity, garbage collection and possibly SLC-programmed buffer space. Like the other mixed workload tests, the 2TB EVO is a little faster than the new 4TB model.

In this test, we precondition the drive with 100% random data and do not record the performance results. We continue writing 4KB blocks to the drive after the drive is full. We see two hours worth of data in the first chart, and the second chart shows the final 200 seconds in steady state.

We see a very large block of red from the Samsung 850 EVO 4TB in the first chart. That's the drive's massive spare area filling with 4KB data. The steady-state random write performance nearly peaks at 10,000 random write IOPS after we finally fill the drive (including the spare area) with data. This performance is an impressive steady-state result, and both of the EVO products match the high-performance 850 Pro. All three of the 850 series SSDs deliver twice the performance of the OWC Mercury Electra 2TB.

The Samsung 850 EVO 4TB brings it all together. It delivers the largest capacity and the highest real-world application workload performance of any other SATA SSD available. Providing the SLC TurboWrite buffer with this much space for accepting incoming data is unprecedented, and the application workload charts show the power of Samsung's V-NAND flash memory.

The two Samsung 2TB SSDs delivered excellent performance, and we didn't think it would be possible to match the results with another SATA SSD. The new 850 EVO 4TB proved us wrong.

There is more to the story than just light workload performance results. Under heavy and moderate loads, and with the drives full, the new 850 EVO 4TB steps further away from the other products. The large spare area and SLC buffer allow the 850 Evo to outperform the Samsung 850 Pro 2TB and the SanDisk Extreme Pro 960GB. You can compare the performance of the smaller capacity SSD here.

The 4TB EVO lacks the strong latency performance of the SanDisk Extreme Pro and OCZ Vector 180 during heavy use, but they are the only two SATA SSDs with lower latency during the most demanding workloads. The 4TB EVO matches the latency of the other products and delivers nearly identical service times when the drives are full and running a lighter workload during the recovery phase.

Disk busy time, which measures the amount of time that at least 1 IO is outstanding, is an interesting measurement for several reasons. A lower score indicates snappy performance, but the drive can also drop into a lower power state to conserve energy when all of the tasks are complete, so less busy time can reduce power consumption. The access patterns run as they would on your system, but in a trace form. The 850 EVO 4TB completes the workload in the least amount of time during most of the tests.

Our Lenovo Y700 notebooks are bearing fruit as we test more drives on the new platform with the latest version of MobileMark. We moved to the new system because it supports both SATA 2.5-inch and PCIe NVMe SSDs. In the chart, we mingled several SATA-based products with the Samsung 950 Pro 512GB, which is our go-to M.2 NVMe SSD.

The inclusion of the 850 EVO 1TB SSDs is noteworthy. One utilizes 2nd generation 32-Layer V-NAND, while the other employs the latest 3rd generation 48-Layer V-NAND. Comparing the two 1TB EVO products allows us to see lower power consumption with 48-Layer NAND, which is one of many other benefits. The 48-layer 850 EVO uses half the number of NAND flash die to reach the same capacity as the previous generation.

The Samsung 850 EVO 4TB lands just shy of 360 minutes in our test with a high-performance gaming notebook. In the limited number of drives we've tested to date (around 30) we've found that 360 minutes is the average for SSDs.

MobileMark 2014 gives us more detail on overall system performance with the different products. The performance chart is essentially a drive efficiency rating in a system-wide reduced power state. One pattern that sticks out right away is that PCIe-based NVMe solutions take a large performance hit under battery power. This reduction is because the system slows the PCIe bus, along with the CPU and memory clock speeds, to reduce power consumption. The Samsung 850 EVO 4TB performs very well in this test.