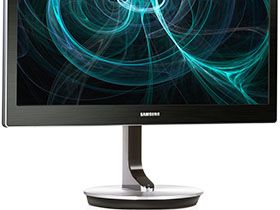 QHD monitors, with a native resolution of 2560x1440, are becoming more commonplace on enthusiast desktops, despite the fact that they still start north of $600. There are a few gray-market exceptions. For example, Auria's EQ276W remains a terrific value at around $400. At the other end of the spectrum, a few manufacturers distance themselves from the pack by adding features and improving performance at a correspondingly higher price point. Atop the price ladder sits the Samsung S27B971D.

Any display selling for four figures needs to offer lots of pixels, a long feature set, or, preferably, both. Top-end performance goes without saying. The only other screen we’ve tested that includes a factory calibration is Asus’ PA279Q, which also boasts a CMS and selectable color gamuts. The PA279Q sells for $850. So, we want to know how Samsung justifies that extra $150.

On paper, the S27B971D's specifications don't necessarily explain why the display is so expensive. It’s not terribly bright, nor does it have the higher refresh rate that would make it attractive to gamers. What we can see is that it's aimed squarely at graphics professionals. Samsung touts factory calibration and out-of-box accuracy as the main selling points. And there's one feature it offers that no other company does: the ability to interface a calibration instrument directly with the monitor’s internal look-up table.

We’ve discussed LUTs in the past. This is best way to add functionality to a monitor’s OSD so you can arrive at a more precise calibration than would be possible otherwise. Samsung eliminates the need to add expensive software and pattern sources to your graphics toolkit. Its application, Natural Color Expert, is included in the package, along with support for all meters commonly in use today like the X-Rite i1Pro and Display2 products. Not only does this software address the usual calibration parameters, but it adds screen uniformity correction to the mix.

During the course of today's review, we'll run through NCE’s entire process. You'll also see us calibrate using more conventional steps. Samsung isn't a company we know to cut corners; however, our tests will show whether it comes up short in any particular metric to achieve that $200 price reduction.

Next Page Packaging, Physical Layout, And Accessories
Topics
Monitors
Samsung
21 Comments Comment from the forums
Be In the Know