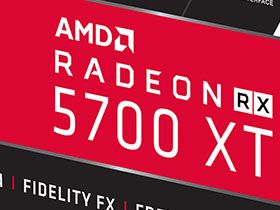 Sapphire gave us access to an early build of its Trixx utility to try out with the Pulse Radeon RX 5700 XT.

The Hardware Monitor tab conveys a lot of the same information already available in GPU-Z’s Sensors tab. It’s just reflected in line graph form exclusively (we like that GPU-Z also gives you an instantaneous reading).

TRIXX Boost is Sapphire’s attempt at making upsampling plus Radeon Image Sharpening a more commonly-used combination of features. This was a big part of AMD’s Radeon RX 5700-series story that we didn’t get to explore because a proper analysis requires careful consideration of image quality. After all, you’re running games at a lower resolution, then upscaling the final output, and applying a contrast-adaptive sharpening algorithm. By default, TRIXX Boost is set to use an 85% resolution scale. At 4K, the feature creates a custom 3264x1836 resolution, which you choose instead of 3840x2160. Just remember that RIS is limited to DirectX 9, DirectX 12, and Vulkan support for now.

In the screenshot above, each mention of 3840x2160 should probably correspond to the actual target resolution Sapphire wants you to select in-game. If you use 3840x2160 as instructed, you won't see any benefit from TRIXX Boost.

Performance naturally improves quite a bit compared to native 4K. But you’ll have to decide for yourself if the trade-off in quality is acceptable. We played around with TRIXX Boost briefly in Shadow of the Tomb Raider and Metro Exodus and couldn’t tell the difference between 3264x1836 and 3840x2160. Every game is going to be different though, as will each gamer’s opinion of fidelity.

Settings gives you the option to load Trixx with Windows, to start minimized, and to apply the settings you’ve changed in the past.

Prev Page Fan Speeds, Clock Rates, and Temperatures Next Page Conclusion
10 Comments Comment from the forums
Be In the Know