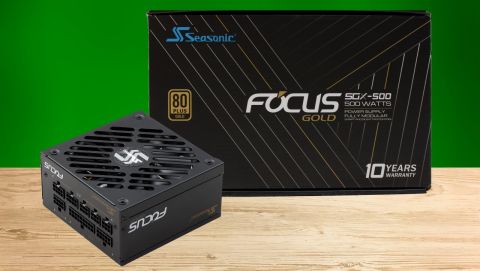 The Seasonic SSR-500SGX has a fair price and offers good performance, but we wish it came with an additional SATA cable.

The Seasonic Focus SGX with 500W capacity achieves top performance and manages to keep its output noise low. Even under tough operating temperatures (>40 degrees Celsius), its fan profile won't go crazy, as long as you don't exceed 50% of the max-rated-output. The main competitors of the SSR-500SGX, in the SFX-L category, are the similar capacity be quiet! model and the SilverStone SX500-LG, with both PSUs achieving much lower overall performance than Seasonic's offering. There are also some SFX competitors, with the Corsair SF450 being the main one, although it has 50W less.

We recently evaluated the strongest member of Seasonic's SGX line, with 650W capacity, which managed to make a very good impression on us. In this review, we will deal with the second strongest member of the line, with 500W capacity, which will either replace the 450W model (SSR-450SGX) or will just fill the 200W gap that currently exists between the 650W and 450W units. Since the 50W difference is insignificant, it would be better if the SSR-450SGX was replaced by the 500W model.

The small packaging doesn't feature any fancy graphics and at its front side you won't even find a photo of the product. You will do find though a mention to the ten-year warranty, which currently is the longest provided in the SFX and SFX-L categories. Such a long warranty shows Seasonic's faith in this platform.

The external design looks nice and the punched fan grille isn't so restrictive (for the airflow). The PSU's finish is good and fairly scratch resistant. On the PSU's back, the modular panel includes eight sockets. Two of them are for the ATX cable and the rest correspond to the EPS, PCIe, SATA and peripheral cables and connectors.

There is a single EPS connector, as is the case in the 650W model, while the number of PCIe connectors is enough to cover the unit's 500W capacity. This is not the case though for the SATA connectors which are only three. There should be an additional SATA cable, increasing the number of the corresponding connectors to six. There are still two sockets left vacant, with all provided cables connected, one for an extra peripheral cable and one for an extra PCIe or EPS cable.

The cables are short since the SSR-500SGX is destined for small cases. Nonetheless, the distance between the peripheral connectors is long enough in order to avoid any compatibility issues. Finally, there are no in-cable caps, which are a nightmare for the majority of users because they make the cables bulky.

The same platform from the SSR-650SGX is used, with some changes in parts. To be more specific, the 500W unit uses different main switching FETs and a small number of +12V FETs, while the bulk cap is smaller as well.

On the secondary side, we measured the same amount of electrolytic and polymer caps (with the SSR-650SGX model), so we expect top-notch ripple suppression performance. The cooling fan is also the same, but apparently a more relaxed fan speed profile is used, since it will have to cope with lower thermal loads.