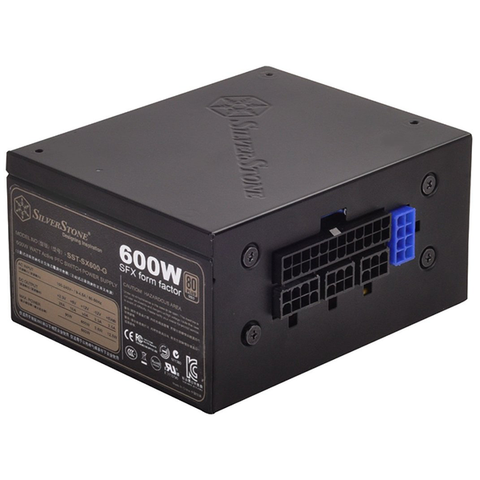 The packaging is small because the PSU is tiny, and at its front we find the series name along with the capacity description. Right below the latter is an icon with some text next to it, depicting the semi-passive mode that this unit exploits. The 80 PLUS Gold badge resides in the top-right corner.

On the sides of the box, we find information about the available connectors and the unit's revision number. SilverStone is among the few companies (possibly the only one) that provides the revisions of their PSU products on the box. As you can see, our sample was one of the first batches. On the other side are technical specifications, along with a specification table. The most interesting information presented is the noise level, which, according to SilverStone, reaches 40 dB(A) at its worst, and the Mean Time Between Failures (MTBF), stated at 100,000 hours for full load operation at 25 °C.

On the box's back is an efficiency graph showing the unit's efficiency curves. Next to that, an outline of the supply's modular board is depicted. Another interesting graph shows the fan's speed throughout the PSU's operational range. According to the aforementioned graph, the fan can reach up to 2300 RPM, after starting at 740 RPM. There, noise output is only claimed to be 18 dB(A).

Inside the box, the PSU is protected by bubble wrap. We would feel more secure if SilverStone used some packing foam too, but it seems the company wanted to keep the box's dimensions small.

The bundle includes an AC power cord, modular cables, a set of fixing bolts and an SFX-to-ATX bracket, which allows you to mount this unit in an ATX case.

Two manuals accompany the SX600-G, providing lots of information. Most of you probably won't even look at them though, so it would probably be wiser for SilverStone to include them in electronic form and save some paper.

An interesting feature is the black (stealth) and flat cables that this unit comes equipped with. They restrict airflow less inside the chassis, allowing for lower operating temperatures of both the PSU and the rest of the system's components.

The PCIe cables have blue connectors, so they stand out. All of the other cables, including the EPS and peripheral ones, use black connectors.

At the front we find only the AC socket. Obviously, there is no space for an on/off switch, which, in our opinion, is essential for any PSU. The front exhaust grill follows the classic honeycomb design, as you can see from the photos above.

One of the two sides shows the power specifications label, which includes several compliance icons.

The back of the modular panel features only five sockets. In a 600 W PSU, we expected to find at least seven or eight. But obviously there wasn't any space in the tiny modular board for so many. The blue socket is for the PCIe cable and the EPS cable attaches to the 8-pin black socket.

The dimensions are small due to the SFX form factor SilverStone designed around. It is amazing how such a small PSU manages to deliver 600W of power. As you can see, the fan isn't located at the center of the unit, so it won't evenly cool down the internal components. After we broke apart the PSU, we noticed that the DC-DC converters, along with the capacitors in the secondary side, weren't covered by the fan's air flow. This could introduce performance and reliability problems, especially under stressful conditions.

Prev Page Specifications, Cables And Power Distribution Next Page A Look Inside And Component Analysis
14 Comments Comment from the forums
Be In the Know