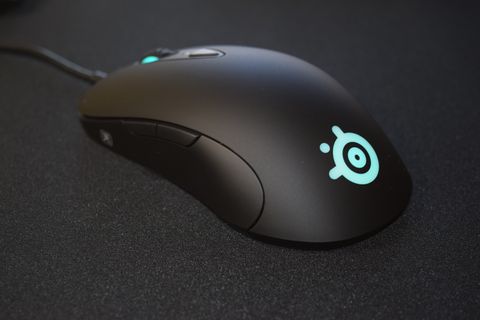 SteelSeries didn’t reinvent the gaming mouse with the Sensei Ten, but anyone looking for solid performance on a budget should appreciate the new TrueMove Pro optical sensor, understated design and comfortable body.

There’s no denying that society favors the right-handed. SteelSeries decided to ditch that bias with the Sensei Ten (MSRP $70 at the time of writing) gaming mouse, which boasts an ambidextrous design that righties and lefties alike can use without compromise. That isn’t enough to set the Sensei Ten apart from the best gaming mice—plenty of companies offer ambidextrous mice—but that’s where its comfort and gaming performance come in.

The Sensei Ten is perfectly symmetrical. It features eight programmable buttons: two on each side, two identically sized top mouse buttons, a perfectly centered scroll wheel and the button underneath the scroll wheel, which is a CPI (counters per inch, also known as DPI) switch by default. This design has its drawbacks—namely that half of its buttons are effectively unusable based on which hand you use, without some serious dexterity training—but it also means left-handed gamers don’t have to compromise on their grip.

SteelSeries also equipped the Sensei Ten with a new TrueMove Pro optical sensor co-designed with PixArt. That sensor offers support for setting CPI between 50 and 18,000 with intervals of 50. That’s led SteelSeries to claim the mouse offers the highest CPI support of any gaming mouse. Additionally, it boasts a 1,000Hz (1ms) polling rate and 50G acceleration for tracking the most frantic movements.The Sensei Ten also offers tilt tracking, which means it automatically compensates for the angle at which it’s picked up or set down.

Otherwise, the Sensei Ten is similar to other SteelSeries mice. It features an RGB-backlit logo and scroll wheel (for anyone who feared their pretty lights would be hidden by their palms while playing), and plugs into your PC via a USB 2.0 cable. Unlike some of its other mice, including the SteelSeries Rival 310 that I use daily, the Sensei Ten’s buttons aren’t separate from the rest of its body. That makes the buttons a little easier to hold down—I occasionally have problems with the Rival 310 in that regard—and makes them slightly quieter. It could also help with durability: SteelSeries claims the Sensei Ten’s mechanical buttons can withstand up to 60 million clicks.

I’m fond of the Sensei Ten’s matte black finish. One problem with the Rival 310, which features a light grey textured panel on its left side, is that it often gets uncomfortable during prolonged gaming sessions. It also shows just how gross my hands can get when I’m getting particularly sweaty in competitive titles. The Sensei Ten doesn’t suffer from either problem; it’s comfortable and grime-free.

Somehow, the Sensei Ten also feels lighter than the Rival 310 even though it weighs more (92g) than its older counterpart (88.3g) without the cable. There are lighter mice on the market, and some people would prefer the option to adjust the Sensei Ten’s weight, (like you can with the Logitech G502 Lightspeed), but the Sensei Ten feels like it hits the sweet spot weight-wise. It’s heavy enough that I don’t lose track of it but light enough that flicking across the mouse pad doesn’t feel like a chore.

Still, the Sensei Ten isn’t for everyone. People who play a lot of MMORPGs, MOBAs and other games that benefit from a lot of side buttons might not appreciate the two easily accessible buttons this mouse offers. It’s also a shame it doesn't come with a detachable cable, or at least a braided one, because the included cable’s plastic is easy to crimp. I wouldn’t transport the Sensei Ten without some kind of case.

Let’s not bury the lede: I prefer the Sensei Ten over the Rival 310. It’s more comfortable during long gaming sessions, its buttons are typically more reliable and it works better with my slightly modified palm grip (I click the left mouse button with my middle finger, and yes, I’m aware of how weird that makes me). The Sensei Ten performed admirably with every game I’ve played.

Does that mean the Sensei Ten improved my own performance? I don’t think so. My aim didn’t seem any better in Counter-Strike: Global Offensive or Rainbow Six Siege, but it didn’t seem any worse, either.

Now for a word of caution on the Sensei Ten’s scroll wheel. It felt good while gaming because it moves just enough for me to cycle through weapons in games like CS:GO and Siege without accidentally switching back to my primary weapon. This is great because inadvertently scrolling too far in a weapon wheel can lead to problems. But outside of gaming, this isn't problematic because you can’t scroll for very long without accidentally pressing the button directly beneath it. That isn’t a deal-breaker for me because I value in-game performance over other use cases. Anyone who mostly uses their PC for reading long articles should just be aware that the Sensei Ten’s scroll wheel button can be a bit overzealous.

Otherwise, I have no complaints about the Sensei Ten’s performance. Tracking seemed accurate no matter what CPI setting I used, and, so far as I could tell, every button press was quickly sent to my PC. It’s hard to gauge durability without months of use—especially since I’ve been careful not to take out any in-game frustrations on this review unit—but the Sensei Ten feels like it will serve its function well for a good while.

Like other SteelSeries products, the Sensei Ten is managed via the company’s SteelSeries Engine 3.0 software. You can control CPI settings, each mouse button’s function and RGB lighting through the software, which can also keep the RGB settings in sync across multiple SteelSeries devices if you wish.

SteelSeries Engine offers numerous default profiles for popular games, (including many of the ones I mentioned above), but I’ve never had a problem with simply using the default profile. The app offers a live preview of any changes, which makes it easy to determine which profile is best for you. That preview is particularly handy when experimenting with different CPI settings or deciding if the backlighting is pretty enough.

You can also use the app to manage the Sensei Ten’s polling rate, angle snapping and acceleration / deceleration. The mouse’s eight buttons (two side buttons, left and right mouse buttons, scroll wheel and the button underneath the scroll wheel) are all programmable. Actions performed when scrolling up or down can also be changed. In addition, SteelSeries Engine features a separate macro editor.

The Sensei Ten offers five customizable CPI levels that, fittingly enough, you can toggle with the CPI button. This is particularly useful if you like to change your sensitivity across multiple titles without having to fiddle with in-game menus to do so. I typically use just two settings—one for normal gameplay and another for when I need to turn my character around more quickly—but that comes down to personal preference.

SteelSeries Engine probably won’t be the best-looking program Sensei Ten owners use, but it gets the job done.

There’s no denying that many other mice offer something the SteelSeries Sensei Ten lacks, whether it’s wireless connectivity, additional lighting options or a bunch of customizable pieces of hardware. It doesn’t have a large number of pretty lights. Its cable isn’t braided and can’t be detached for easy transport. And you can't change the look or feel of the mouse. The Sensei Ten you unbox is pretty much the Sensei Ten you’ll be using going forward.

So it’s a good thing, then, that the Sensei Ten is compelling enough to stand out without those whiz-bang features. SteelSeries didn’t reinvent the gaming mouse. Instead, it created a reliable device that doesn’t favor right-handed users, yet is actually more comfortable than at least one of the company’s right-handed mice, at least to my hand. The Sensei Ten is comfortable to use, performs well in-game and doesn’t have glaring flaws.

All that in a $70 gaming mouse is a good deal. It’s worth the extra $10 over the Rival 310. As for higher-end mice, many will cost double what the Sensei Ten does in exchange for some features that probably won’t make them that much better for most typical gamers.