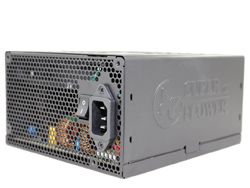 The +12V rail performs well in these tests. This comes as no surprise since that's usually the case with PSUs that use the Leadex platform. Super Flower does a very good job with its +12V, 5V and 5VSB rails. However, we cannot say the same for the 3.3V rail, where the deviations exceed four percent in both cases and the voltage drops below 3.2V once we apply the transient load.

The turn-on tests appear fine since we don't notice any voltage overshoots or spikes.