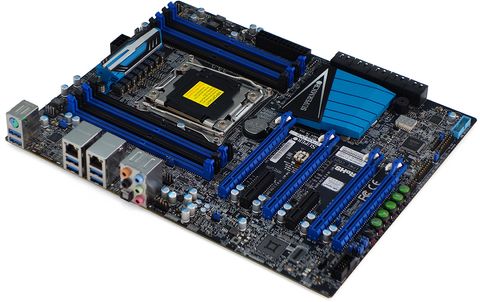 Supermicro’s firmware GUI resembles a touchscreen interface, placing most user-configurable options under its Overclocking menu. This includes most memory controls, since the memory menu includes only basic settings.

The CPU overclocking menu includes several pre-defined overclocks, ranging from 4.2GHz at 1.40 Vcore/Vcache, to 4.8GHz at 1.5 Vcore/Vcache. Our CPU is far too voltage-sensitive to work with any of those settings though; all of them cause near-instantaneous thermal throttling no matter how large our cooler.

This CPU reached 4376MHz at 102MHz BCLK, a 43x CPU core to BLCK multiplier and 1.28V. Adjusting BCLK and voltage isn’t like any other board we have in-house, as typed-in settings require using the backspace key to remove current values.

This configuration also encountered an issue with “CPU Short Duration Power Limit Switch” set to “Disabled”, where it would mysteriously throttle down the CPU clock quickly after initiating a high-current load. A 512W setting proved adequate, even though the processor never needed more than half as much.

SVID Override Voltage is a setting to watch out for. The board automatically set +600mV when initiating DDR4-3000 XMP values, and that setting appeared to cause random resets.

Manually configuring CPU input voltage to 1.90V (rather than relying on automatic voltage control and offset) appeared to provide the best stability with our hardware.

Even though the C7X99-OCE supports a wide enough range of memory multipliers to reach DDR4-4000 at stock BCLK, the board still chose a 125MHz BCLK for our DDR4-3000 data rate. That might not have been a problem, except we weren’t able to find an effective setting to reduce the CPU multiplier. Disabling Turbo Boost meant nothing to the board, setting a lower non-Turbo Boost ratio didn’t help under load and any Turbo Boost ratio below 35x was ignored. Settings that involved this memory’s XMP profile required a 4.38GHz CPU core, and the only way the memory could even be tested at DDR4-3025 was to increase core voltage and allow the CPU to throttle back.

I tried using manual configuration with XTU timings to reach DDR4-3000 without CPU overclocking, but the board refused to boot. Furthermore, the DRAM voltage had to be manually configured, as the board didn’t configure its XMP-rated voltage. The board’s 20mV default DRAM overvoltage paired with 50mV settings and our voltage-sensitive CPU to require the 1.30V setting, rather than 1.35V, to reach a stable 1.32V rather than an unstable 1.37V.

Probably ideal for owners of a perfectly-paired memory and CPU configuration, primary, secondary and tertiary timings are all adjustable.

Prev Page More C7X99-OCE Details Next Page Results: Benchmarks, Efficiency And Overclocking
10 Comments Comment from the forums
Be In the Know