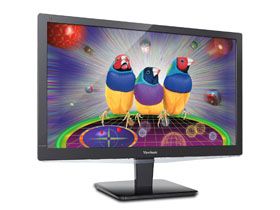 We've seen Ultra HD monitors in four distinct categories -- 32-inch IGZO/IPS, 28-inch TN, 27-inch IPS and 24-inch IPS. All are represented in our comparison group today. From ViewSonic we have the VP2780-4K, NEC brings the EA244UHD and PA322UHD units, BenQ offers the BL3201PT and Monoprice covers TN tech with its 28-inch CrystalPro 4K.

ViewSonic claims 300cd/m2 for the VX2475Smhl-4K, but our sample came up a bit short at 287.7665cd/m2. That's not too far off but most monitors of any resolution are brighter. Still, unless you need to use the display in sunlight, there's more than enough output for either productivity or gaming.

Until we get to measure an Ultra HD VA panel, we won't see superlative black levels here. ViewSonic does take the prize in today's group however, with an excellent .2936cd/m2 measurement.

Max contrast is right in the middle of the pack at 980.2 to 1. Ideally, we'd like to see a ratio over 1000:1, but the VX comes pretty close. ViewSonic's 27-inch UHD display is the winner here. The top three screens are fairly typical of modern TN and IPS monitors. Only VA promises significantly higher contrast from LCD technology.

The VX2475Smhl-4K's backlight drops to a near-ideal 44.3169cd/m2 at its minimum setting. To bring it up to 50cd/m2, set the slider on level three. You can see NEC's usual low-output setting of around 20cd/m2 for the PA322UHD and EA244UHD. Even in total darkness it's hard to make out fine detail when the monitor's peak white level is that low.

The two NECs have an unfair advantage in this test due to their dim backlights. The VX2475Smhl-4K's is low as well, which accounts for its third-place finish. But overall, contrast appears to be fairly consistent at all backlight levels.

Minimum contrast takes a small hit when the backlight is at its minimum. It's only off by 2.3 percent though, which is imperceptible to the naked eye. The performance we're seeing so far is pretty much the same as other IPS monitors of all resolutions. The fact that this one is Ultra HD makes no difference in these tests.

The VX2475Smhl-4K stays in the upper tier for the calibrated black level test. Even though we had to drop the contrast control one click and lower the red and green levels, contrast has not suffered a bit.

The calibrated contrast result is nearly identical to the uncalibrated one. Considering the improvement in color accuracy, we think the adjustments are well worth making. If you don't have access to a color meter, try our settings from the previous page.

A tiny bit of extra brightness down the left side of our sample reduces the ANSI result by six percent. This is a minor flaw and one you won't see in actual content. As you'll see later, overall screen uniformity is quite good. The VX2475Smhl-4K provides good contrast at all brightness levels and in all types of real-world material. We can't imagine anyone being dissatisfied with its image.