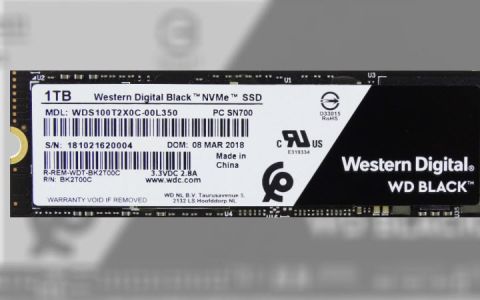 WD's new NVMe controller is a step in the right direction for one of the world's largest flash producers. Every flash manufacturing company dreams of having an in-house controller, it allows the company to make better use of the flash and build superior products, but few have the engineering expertise to make it happen. It worked out very well for Samsung, and Western Digital hopes to have similar results.

The WD Black is faster than the 1TB 960 EVO in most of our tests. WD's controller is still new, and we expect to see firmware updates over time. Western Digital hasn't given us any indication of pending updates, but that's standard operating procedure with consumer SSDs. That is one benefit of working with a third-party controller design house like Marvell or SMI: the testing tends to be more robust because other companies also validate the same controller. We found some odd behavior in some tests, but it wouldn't would keep us from recommending the new Black SSD.

We feel like WD missed an opportunity with Marvell and SMI. Both companies failed to deliver an enthusiast-class controller with the previous generation but rebounded. Marvell announced new 8- and 16-channel controllers on the same day we sat down with Western Digital to discuss its new controller. At CES, we saw Marvell's 8-channel controller pushing over 670,000 IOPS.

SMI responded to its 2017 SM2260 folly with the SM2262 controller that powers the Intel 760p and HP EX920. We haven't tested the 1TB 760p, but the HP EX920 delivers better performance than the 1TB Black and it debuts at $369.99 in a few weeks. Intel and HP are just the beginning of things to come. Adata has already announced two products with the SM2262 controller, and more will follow.

The situation gets worse as the year rolls along. SMI positioned the SM2262 to slot in the middle of the mainstream and enthusiast market, but the high-performance SM2262EN will come to market later this year. By then we should see even lower flash prices.

This all means that while Western Digital is in a good position with the Black right now, it will need to address pricing in the future. It's a safe bet that Samsung will lower 960 EVO and Pro pricing just like it did when Crucial released the MX500.

The success of the Black SSD series depends on the steps WD takes in the weeks to come. We can't recommend the 1TB Black at its $449.99 price point. Our outlook for the Black will become more favorable if WD matches the EX920's $369.99 price point. But like the current market conditions, this is a moving target with several unseen variables. The Black NVMe SSD is a very good product, but it will need either a firmware update to achieve performance dominance or a price drop to be more competitive with emerging products.