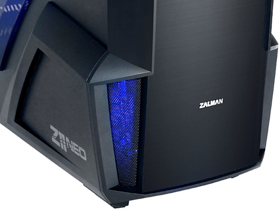 Building With The Z11 Neo

The Z11 Neo includes a basic screw pack, an 8-pin ATX/EPS 12V extension cable, and a single expansion slot cover. That last part might be a bigger problem for build-your-own enthusiasts than Zalman anticipated. Unlike professionals, home-based builders tend to be hobbyist, and changing configurations is part of the PC hobby.

Experienced builders including hobbyist have long seen break-away slot covers as a sign of cheapness, and “cheapness” shouldn’t apply to a case that weighs over 17 pounds. We know that slot covers cost manufacturers pennies apiece, that breakouts are hard to remove after the motherboard is installed, and that a single slot cover is not enough to fill the myriad of slots that we may open up to test different configurations. Understanding that this $85 case would have still cost less than $90 if its slot panel were filled with removable slot covers, Zalman’s decision is baffling.

The cable selection makes sense, featuring a split power LED connector to fit both standard and Asus motherboards. The Z11 Neo gets rid of the old AC-97 audio cable that we haven’t used in a dozen years, supporting the more-recent HD Audio front-panel connection exclusively.

Our 2.5” SSD screws securely to the back of the motherboard tray, though we did need a long screwdriver to reduce the angle between the driver head and screw. Cable tie tabs made it easy to wrap both the main ATX power cable and the EPS12V cable around the drive, which removed excess cable length.

The extended cooler of our Gigabyte GTX 970 required removal of the upper drive cage, though a standard (reference design) GTX 970 would fit. The Z11 Neo supports motherboards and cards up to 11” long with all the drive cages installed, and we chose a narrower “Standard ATX” motherboard over our oversized reference model merely to open up the cable passage slots.

The LED-lighted front fan draws air from both the front grills and a slot beneath the front panel, while the tiny exhaust fans inside the side panel blow drive heat out of the side vents. Though all the blue lighting may make the Z11 Neo a little too bright for an office, the tinted side window and translucent grey top louvers soften the appearance when compared to typical “lighted” cases.